(CNN) -- Palestinians activated an explosive device and a Palestinian was killed by Israeli helicopter fire early Tuesday in the first incidents of violence since last week's Mideast cease-fire, according to Hamas and Israeli army sources. 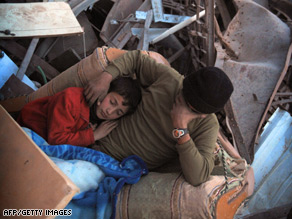 A family sleeps outside their destroyed house in Jabalia's Ezbet Abed Rabbo district in northern Gaza.

The explosive device was detonated against an Israeli army patrol along the border just north of Kissufim crossing about 8 a.m. Tuesday.

In the fighting, an Israeli soldier was killed and three others were wounded, according to the Israeli military.

The Palestinian was killed by Israeli helicopter fire east of Khan Yunis, near the border fence with Israel, about 90 minutes later.

Israel closed the crossings between Israel and Gaza after the explosive was detonated, a defense ministry spokesman said.

Israel launched its 22-day assault on Hamas, the Palestinian movement which controls Gaza, on December 27. More than 1,300 Palestinians died during the air and ground campaign, and 13 Israelis were killed.

Israel declared a unilateral cease-fire in mid-January, and pulled its troops out by January 21.

It said the operation aimed to stop Palestinian militants from firing rockets into Israel from Gaza.

Last Sunday Israel's government approved a measure that would give legal protection to its military officers if they are accused of war crimes during the Gaza incursion.

"The state of Israel will completely back anyone that acted in its name," Prime Minister Ehud Olmert said. "The soldiers and commanders that were sent on missions in Gaza need to know that they are safe from different tribunals.

"Israel will assist them and protect them as they physically protected us during the operation in Gaza," he said.

A team of legal experts, led by Justice Minister Daniel Friedman, will defend Israel's military operation in Gaza, according to Olmert. Friedman and international law experts will formulate answers to possible questions regarding the activity of the Israel Defense Forces that might arise, he said.

The Israeli government -- particularly the Defense and Justice ministries -- is concerned that Israeli military officers could be singled out in future lawsuits alleging human rights violations during Israel's recent offensive against Hamas, according to the Israeli newspaper Haaretz.

U.N. Secretary-General Ban Ki-moon has demanded an independent investigation into Israeli military actions that damaged U.N. facilities in Gaza. Israel is alleged to have used white phosphorous shells which sparked a massive fire at the U.N. humanitarian compound.

The use of white phosphorus is restricted under international law.