JERUSALEM (CNN) -- Israeli missiles struck near the Gaza border Wednesday morning, even as George Mitchell, President Obama's envoy to the Middle East, was scheduled to arrive in hopes of shoring up a fragile cease-fire there. 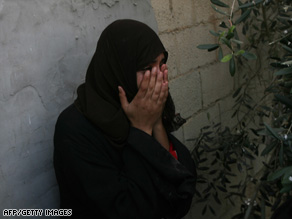 A relative of Palestinian killed by Israeli helicopter fire Tuesday mourns at his funeral the same day.

One of Israel's key demands in peace talks has been international help shutting down tunnels it says Hamas fighters use to smuggle weapons into Gaza.

Tuesday saw the first breach of a January 21 cease-fire between Hamas militants in the Palestinian territory and Israel, which had launched a three-week offensive in Gaza, saying its goal was to stop missile strikes into southern Israel.

Later Tuesday, an Israeli helicopter fired on a target near the border, killing one, a Hamas security source said.

Mitchell was expected to arrive in Cairo, Egypt, on Tuesday as part of an eight-day trip to the region.

He plans to meet with leaders in Israel, the West Bank, Jordan and Saudi Arabia.