BAGHDAD, Iraq (CNN) -- For the war-beaten orphans of the northern Iraqi city of Tikrit, this big old shoe fits. 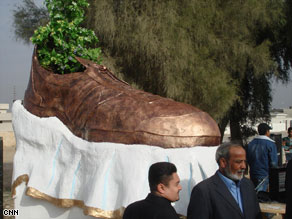 A monument to a shoe thrown at former President Bush is unveiled at the Tikrit Orphanage complex.

A huge sculpture of the footwear hurled at President Bush in December during a trip to Iraq has been unveiled in a ceremony at the Tikrit Orphanage complex.

Assisted by children at the home, sculptor Laith al-Amiri erected a brown replica of one of the shoes hurled at Bush and Prime Minister Nuri al-Maliki by journalist Muntadhir al-Zaidi during a press conference in Baghdad.

Al-Zaidi was jailed for his actions, and a trial is pending. But his angry gesture touched a defiant nerve throughout the Arab and Muslim world. He is regarded by many people as a hero. Demonstrators in December took to the streets in the Arab world and called for his release.

"Those orphans who helped the sculptor in building this monument were the victims of Bush's war," al-Naseri said. "The shoe monument is a gift to the next generation to remember the heroic action by the journalist."

"When the next generation sees the shoe monument, they will ask their parents about it," al-Naseri said.

"Then their parents will start talking about the hero Muntadhir al-Zaidi, who threw his shoe at George W. Bush during his unannounced farewell visit."

Saddam Hussein, the former Iraqi leader toppled by the United States in 2003, was from the Tikrit region.

Al-Zaidi marked his 30th birthday in jail earlier this month. One of his brothers said he is "in good health and is being treated well."

Al-Zaidi's employer, TV network al-Baghdadia, keeps a picture of him at the top left side of the screen with a calendar showing the number of days he has spent in detention. The network has been calling for his release.