Official: U.S. will not renew Iraq contract with Blackwater 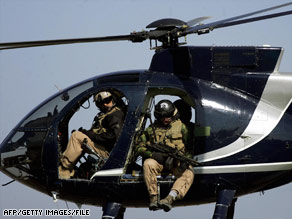 Blackwater's latest "task order" expires in May, and the senior official said that "one of the conditions is that you have to have a license" to continue working in the country.

"No license, no renewal," the official said. "If they don't have a license to operate, we would certainly not renew the task order."

The official said the decision would not affect other contracts Blackwater has with the State Department to protect American diplomats around the world.

As part of a contract to protect American diplomats and other employees worldwide, the State Department hired Blackwater for a multiyear assignment in Iraq, renewable each year. Blackwater, one of three security firms working for the United States in Iraq, has one of the biggest security contracts there.

Officials said the State Department is talking with security firms DynCorp International and Triple Canopy, which share the Iraq contract with Blackwater, about picking up Blackwater's duties.

The Iraqi government has been unclear about when Blackwater will have to cease operations. But the official said, "We are working to make sure our people are protected."

Losing the contract will be a huge blow to Blackwater. It has been estimated that the Iraq contract makes up one-third to one-half of the privately held company's business. Blackwater has about two dozen aircraft in Iraq and 1,000 personnel.

Watch why Blackwater is notorious among Iraqis »

Blackwater says its employees were returning fire after they were attacked by armed insurgents. An Iraqi investigation concluded that the guards randomly fired at civilians without provocation.

The company does not face charges. But the Baghdad incident exacerbated the feelings of many Iraqis that private American security contractors have operated since 2003 with little regard for Iraqi law or life.

The indictment of the five men represents the first prosecution of non-Defense Department contractors under the Military Extraterritorial Jurisdiction Act. The act was amended in 2004 to allow the Justice Department to prosecute such personnel providing services "in support of the mission of the Department of Defense overseas."

The recently approved U.S.-Iraqi security agreement specifies that U.S. civilian contractors will no longer be immune from Iraqi prosecution for crimes committed in that country.

Iraq has required the licensing of private security companies since 2004, but the provision was not strictly enforced.

Starting January 1, the Iraqi government has mandated that all contractors obtain licenses to operate.

As of Wednesday, Blackwater said it had not been officially notified of any Iraqi decision not to renew its license.

All About Blackwater Worldwide • Iraq • U.S. Department of State • Trials