BAGHDAD, Iraq (CNN) -- Four thousand women are running for office in Iraq's provincial elections Saturday, and many of them will be guaranteed seats under an electoral quota system. 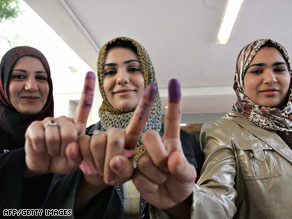 Iraqi women show off their ink-stained fingers after voting Saturday in Baghdad.

Regardless of the votes their candidates receive, parties are required to give every third seat to a woman, according to a report this week from the International Crisis Group.

The ultimate share of seats held by women will depend on the distribution of votes among parties, the report said.

Some women candidates say these elections -- only the second provincial elections since the fall of Saddam Hussein -- are a chance to improve their standing in Iraqi society.

Nibras al-Mamuri is a secular female candidate who argues that fundamentalists have taken over the country. She says it was the 2005 elections that brought them into power and tarnished Islam's image in Iraq.

Al-Mamuri, who is running for the Baghdad provincial council, says it's time for a change.

Watch how women are trying to bring change to Iraq »

"Although a woman's role in the Arab world is mainly that of a mother and child bearer," she said, "I want to prove that women are just as capable as men when it comes to challenging arenas."

At first, al-Mamuri said, she thought just participating in the elections as a woman was enough. But now, she says she is running to win in order to defy men who believe a woman's place is in the home.

"I've entered a battlefield where women have to prove they are competent," she said. "I have to forget about fear."

In recent years, Iraqi women have been targeted by extremists for a variety of reasons -- from not covering their hair to entering the political arena.

Under Hussein, Iraq was one of the more secular Arab countries, but the 2003 U.S. invasion unleashed extremist militias. Now, many activists say women have been forced back to the Dark Ages, forced to be submissive, anonymous and fully veiled.

"An Iraqi woman can be an equal. She can participate in change," she told CNN.

The image of a woman posing a public and direct challenge to fundamentalists and their beliefs was not seen in the 2005 vote.

All About Iraqi Politics • Women's Issues