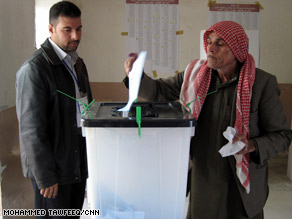 Residents of Iraq's Ramadi province cast their votes this weekend during provincial elections.

The turnout of 7.5 million voters starkly contrasted with elections in 2005, when the violence and intimidation of al Qaeda in Iraq kept voters away from the polls and only 2 percent of eligible voters participated.

Faraj al-Haidari, the head of the Independent High Electoral Commission, called the turnout this year "very high" for provincial elections in any country. Fifty-one percent of the 14.9 million registered voters cast ballots.

Al-Haidari called the weekend voting the "most important elections in the history of Iraq since the fall of Saddam Hussein."

Voting was held in 14 of Iraq's 18 provinces. The highest turnout -- 65 percent -- was in the Salaheddin province in northern Iraq, the commission said.

The lowest -- 40 percent -- was in Anbar, the Sunni heartland west of Baghdad. The sprawling desert area was dominated in 2005 by al Qaeda in Iraq.

Preliminary results from the electoral commission are expected within five days. Final numbers are due at the end of February.

CNN's Arwa Damon, who toured polling stations with U.N. observers, said she noticed an increased sense of awareness and optimism among voters, who said they felt their participation would have an impact on their lives and country.

Political analysts said this election could correct some of the political imbalances that resulted from the 2005 election. Saturday's voting also was seen as a referendum on the popularity of Prime Minister Nuri al-Maliki.

"We are trying to build a new system of government in the heart of the Islamic Middle East," Iraqi Deputy Prime Minister Barham Saleh told CNN.

Those elected will have regional power over the essentials Iraqis have been desperate for -- basic services and jobs, Damon reported.

Observers believe the provincial vote will be a gauge of the country's political direction and an indication of how the parliamentary elections will turn out later this year.

The results should spell out the status of the Sunni Arab "Awakening" movement -- which opposes al Qaeda in Iraq -- and the popularity of the Shiite factions, such as those backing al-Maliki, Shiite cleric Muqtada al-Sadr, and the Islamic Supreme Council of Iraq.

Officials set up tough counter-terror measures for the election, including security rings around polling stations and vigorous searches of voters.

Despite the heightened security, three mortars exploded near a polling station in central Tikrit, about 100 miles (160 kilometers) north of Baghdad, on Saturday morning, an official with the Interior Ministry told CNN. There were no casualties.

In another incident in Tikrit, police detained four people wearing Iraqi police uniforms who they said had thrown stun grenades at voters outside a polling center.