TEHRAN, Iran (CNN) -- Iran Tuesday successfully launched its first satellite into orbit, a step hailed by Iran's president as a "source of pride" for the Islamic republic, according to state-run news outlets. 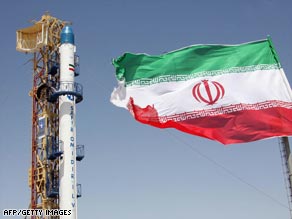 Reported satellite launch took place on the 30th anniversary of the Islamic revolution in Iran.

"Developing a space launch vehicle that could ... put a satellite into orbit could possibly lead to development of a ballistic missile system," State Department acting spokesman Robert Wood told reporters. "So that's of grave concern to us."

On Wednesday officials from the United States, Britain, France, Germany, Russia and China will meet in Germany to discuss next steps on Iran. Wood said that Undersecretary William Burns, who is representing the United States, will seek input and discuss some ideas the Obama administration has about how to move forward.

There were no indications of any weapons activity on the two-stage rocket, although the rocket is capable of launching long-range weapons, the officials said.

"I wouldn't think of this in terms of highly advanced technology," one U.S. official said. But it does suggest Iran's two-stage rockets are increasingly reliable.

The Pentagon said Tuesday the launch is "clearly a concern of ours."

"Although this appears to be satellite, there are dual-use capabilities that could be applied to missiles, and that's a concern to us and everybody in region," Department of Defense spokesman Geoff Morrell said.

The launch of the satellite Omid -- which means "Hope" in Farsi -- was timed to coincide with the 30th anniversary celebrations of the Islamic revolution in Iran, according to Iranian media reports.

Iran said the satellite had already completed its first mission -- to transmit a message from Iranian President Mahmoud Ahmadinejad, who spoke at the launching ceremony Monday night.

In his message, Ahmadinejad congratulated the nation and said the successful launch improves Iran's status in the world, the Islamic Republic News Agency reported.

He stressed that both the satellite and the Safir rocket used to launch it were made entirely by Iranian technicians.

Iranian Defense Minister Mostafa Mohammad Najjar said that despite the small size of the Omid satellite, it will open the way for an Iranian space program. He said Tehran plans to launch another satellite in the future.

In August, Iran performed a test of a rocket capable of launching a satellite into orbit. Iranian officials declared that mission a success, but U.S. officials disputed that.

Senior U.S. officials had expressed concerned about the test of the rocket, saying Iran could use the rocket to deliver warheads.

All About Iran • Barack Obama