JERUSALEM (CNN) -- Palestinian militants fired a long-range rocket from Gaza into southwestern Israel on Tuesday morning. It was the first such attack into the city of Ashkelon since the two sides declared a cease-fire, the Israeli military said. 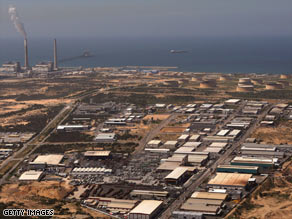 This aerial view shows the power station and industrial zone of Ashkelon, Israel, in March of 2008.

The missile fired from a Grad rocket launcher did not cause any injuries or damage in the coastal city, said a spokesman for the Israel Defense Forces.

Rockets fired from a Grad have a longer range than the crude, home-made Qassams that Palestinian militants in Gaza fire more frequently. Militants have used Grads to strike farther into Israel.

Israel and Hamas, the Islamic militant group that has ruled Gaza since 2007, declared separate, tentative cease-fires two weeks ago after more than three weeks of fighting in Gaza.

More than 1,300 Palestinians died and about 5,400 others were wounded. Thirteen Israelis, including 10 soldiers, were also killed in the fighting.

Since the two sides declared a cease-fire on January 21, militants have sporadically fired rockets into Israel. Israel has responded with air strikes.