TEHRAN, Iran (CNN) -- A group of Iranian intellectuals released a public apology this week for what they say is a long history of the country's mistreatment of members of the Baha'i faith. 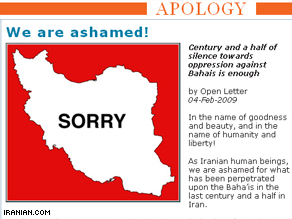 The letter lists 11 reasons why its signatories are ashamed of the past treatment of Baha'is.

The apology -- titled, "We are ashamed" -- was published on the Web site Iranian.com and was signed by 42 Iranian professionals, all of whom do not live in Iran.

"As Iranian human beings, we are ashamed for what has been perpetrated upon the Baha'is in the last century and a half in Iran," the letter says.

In the letter, the group detailed incidents of violence and discrimination that it says the Iranian government has perpetrated against Baha'is.

The Islamic republic has been condemned by human-rights activists and governments across the globe for its treatment of members of the Baha'i faith.

The Baha'i movement has said that six of its followers were arrested in January in Tehran, including one who works with Nobel peace laureate Shirin Ebadi, the lawyer and activist. Seven leaders of the group arrested in 2008 also remain in jail.

Members of Baha'i -- who say they are targeted in the predominantly Shiite nation because of their faith -- have faced arrests and other oppression over the years.

They say the persecution is part of a pattern that began in 1979. That's when the monarchy of the Shah of Iran was toppled and an Islamic republic was created.

Baha'i -- regarded as the largest non-Muslim religious minority in Iran -- claims to have 5 million members across the globe and about 300,000 in Iran.