BAGHDAD, Iraq (CNN) -- U.N. Secretary-General Ban Ki-moon paid a visit to Baghdad on Friday to congratulate its citizens for last weekend's "remarkable" Iraq-led provincial elections, a process he said "augurs well for the transition process and the solidifying of Iraq's national reconciliation." 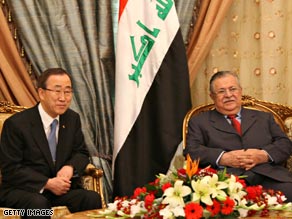 On a tour that also has taken him to Pakistan and Afghanistan, Ban met with Iraqi leaders and appeared at a news conference with Prime Minister Nuri al-Maliki, whose allies won big in nine of the 14 provinces where the local elections were held.

"I have been following the electoral process closely from the early days of the parliamentary debate over the elections law last summer to the final stages of adjudication of the complaints and yesterday evening's release of the provisional results," Ban said at the news conference, according to prepared remarks issued by the United Nations.

"It will be some days before final results are known, but current indications are that the elections have been successfully carried out."

Ban last visited Iraq in 2007. In March of that year, he got a taste of the violence that often rocks the Iraqi capital. An explosion rattled Baghdad's International Zone, where he was holding a televised news conference with al-Maliki.

Apparently used to such blasts, al-Maliki remained stoic, while Ban briefly ducked before regaining his composure and continuing.

Now, he said, he's "very much impressed to have witnessed myself the great success and progress the Iraqi government and people have made under the leadership of Prime Minister Maliki, and I congratulate you," he said, emphasizing the improvements in security.

The secretary-general praised the turnout of millions of voters in "an environment free of violence," a development he called a "remarkable achievement" in a strife-torn nation.

"Iraq has come a long way in taking their own affairs in hand, this being the first Iraqi-led and Iraqi-owned electoral process. It is a tribute to the growing effectiveness of the Iraqi security forces, and testifies to the increasing stability in the country," he said.

Voters in 14 of 18 provinces turned out last weekend to elect provincial councils. The nation's three Kurdish provinces will hold elections in May, and voting in Tameem province has been suspended because of political disputes in Kirkuk.

"This marks an important event, these being the first polls to affect the day-to-day lives of Iraqi voters," Ban said. "In fact, these elections are about real power, in the sense that local leaders are nominated to be accountable for the delivery of basic services."

The United Nations helped Iraq with logistics in its election process and plans to help in this year's parliamentary elections and to deal with sticky disputes, such as the status of Kirkuk and disputes over some internal boundaries.

Al-Maliki thanked the United Nations for the supportive role it played.

He noted that the provincial elections "changed the political map" of Iraq, but he said the elections were successful for all Iraqis. He said he was proud people voted for blocs based on political goals and not along sectarian and ethnic lines.

All About United Nations • Iraq