(CNN) -- The appointment of a Saudi woman as a vice minister in the country's government is a "first step" for women's rights in Saudi Arabia, but "more serious changes" are needed, an outspoken advocate said Sunday. 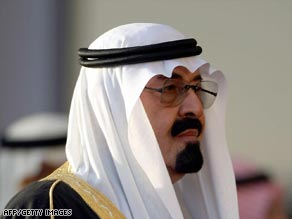 "It is something really great, and we are very proud of our king that he took this decision," Wajeha al-Huwaider told CNN. "And I think it's going to be the first step toward the reform that he promised."

King Abdullah on Saturday appointed Norah al-Faiz to serve as the newly created vice minister for women's education as part of a major Cabinet reshuffling. It is the highest rank a woman has achieved in the Saudi government.

"I'm very proud to be nominated and selected for such a prestigious position," al-Faiz told CNN on Saturday. "I hope that other ladies, females, will follow in the future."

Al-Faiz said she's confident her appointment is not simple tokenism.

Watch more on the shake-up in the Saudi government »

But al-Huwaider said it is unclear if al-Faiz will have any real power, or if she will follow the path of other Saudi women who had been appointed to lower councils but were never heard from.

She noted that Saudi women still do not have the right to drive and are still recognized under Saudi law as the property of men.

"Even this minister now ... she is not really in control of her life," al-Huwaider noted. "It is not up to her, it's up to her male guardian."

She said the "guardianship system" is the first thing that should be removed by the new Saudi government.

"This is the main thing that is controlling our life," al-Huwaider said. "We want to be able to drive our cars, you know, to feel like we are just like the rest of the world."

Other positions that were replaced were the head of Saudi Arabia's influential Commission for the Promotion of Virtue and Prevention of Vice, as well as the ministers of health, justice, culture and education.

"King Abdullah has always been saying this for quite some time, that he would like to see the country progress," al-Maeena told CNN. "He has taken many initiatives, reforms, enhanced the power of women....

"And right now, by getting these people who are young -- some of them -- who have the right ambition and the right knowledge, to go ahead, I think it means that there is going to be a march towards progress."

All About Saudi Arabia • King Abdullah