(CNN) -- Organizers of a tennis tournament in Dubai, criticized for banning an Israeli player, said Tuesday they were trying to protect the woman from anti-Israel protests. 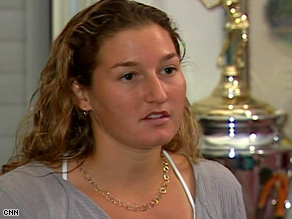 "The Tournament respects Ms. Shahar Peer as a professional tennis player on the Tour and understands her disappointment," the organizers wrote in a statement.

"Ms. Peer personally witnessed protests against her at another tournament in New Zealand only a few weeks ago.

"We do not wish to politicize sports, but we have to be sensitive to recent events in the region and not alienate or put at risk the players and the many tennis fans of different nationalities that we have here."

Peer was scheduled to fly to the United Arab Emirates on Sunday, but was informed on Saturday night by telephone that she would not be granted a visa.

This sparked a response from the Sony Ericsson WTA Tour that it could drop Dubai from the World Tennis Tour calendar.

"I am confident that the Tour will take appropriate actions to ensure that this injustice is not allowed to occur in the future, and that the Tour will make sure I will not be further harmed in the short and long term," Peer said in a statement on Tuesday.

"There should be no place for politics or discrimination in professional tennis or indeed any sport."

Peer has experienced a "tremendous outpouring of support and empathy" from fans, friends and fellow players, but agrees with the Tour decision to go ahead with this week's Dubai Open.

WTA chairman and chief executive officer Larry Scott had said: "The Sony Ericsson WTA Tour believes very strongly, and has a clear rule and policy, that no host country should deny a player the right to compete at a tournament for which she has qualified by ranking."

Scott noted this is not the first time Dubai has taken this type of action.

Last year an Israeli men's doubles team was denied entry while Andy Ram, a member of Israel's Davis Cup team, is scheduled to compete in next week's men's competition.

World No. 6 Venus Williams told The New York Times: "All the players support Shahar. We are all athletes, and we stand for tennis."

On Tuesday in Dubai, Venus rushed to a 6-0 6-1 win over Anastasia Pavlyuchenkova whose Russian compatriot and second seed Dinara Safina suffered a shock exit against Virginie Razzano, of France, 6-2 6-4.