BAGHDAD, Iraq (CNN) -- Iraq's National Museum re-opened to the public Monday, nearly six years after it was pillaged in the chaotic days following the fall of Saddam Hussein. 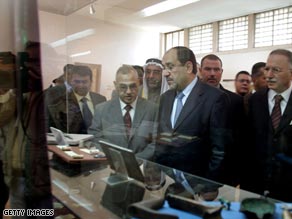 Those items went on display in a special wing of the museum Monday.

Iraq aims to make the museum "the best in the world," Prime Minister Nouri al-Maliki said at the opening ceremony, adding that a huge international campaign is still needed to recover looted objects.

A number of countries in the region returned objects to Iraq last year, deeming the country safe enough to secure them.

But concerns remains high that the country's hard-won stability is not irreversible and that the collection could be endangered if violence gets worse again. Reopening the museum is yet another test that will face the Iraqi security forces.

But most Iraqis are going to look at this move as something of a positive sign, CNN's Arwa Damon in Baghdad said.

Iraqi soldiers in December seized 228 apparently stolen antiquities and arrested seven members of a gang suspected of trafficking in such items, a security official in Basra said at the time.

Soldiers in Abi al-Khasib in southern Iraq's Basra province found 168 items and arrested five people in one raid and seized 60 more artifacts and detained two people in another, the official said.

The troops found sculptures, intricate gold jewelry, decorative silverware and ceramic bowls buried in gardens and under a stone slab in a kitchen.

In 2005, the FBI in the United States listed missing artifacts from the Iraqi National Museum among the "Top Ten Art Crimes" it sought to solve.

More than 800 looted artifacts were returned to the National Museum in November 2003. Then-Culture Minister Muhammad al-Jazaari expressed his happiness in recovering a 2300 B.C. copper Bassetki statue, a wood-clad-and-bronze brazier and about 820 other smaller objects from different periods that were stolen.

"This is a very good day in the history of the Iraqi museum," Mario Bondioli-Osio, a senior adviser to the Ministry of Culture, said at the time.

The ministry issued an amnesty for all citizens who returned looted archaeological artifacts.

Museum Director Donny George said in late 2003 that the amnesty was still open for the citizens to bring back all objects in their possession "because this is their heritage." George said citizens were bringing back antiquities daily.

"The heritage of the world and mankind's history has been recovered in Iraq, thanks to the efforts of the U.S. MPs and the Iraqi police," he said.