CAIRO, Egypt (CNN) -- The weekend bombing in one of the Egyptian capital's busiest tourist districts was not orchestrated by any known extremist group, state-run media reported. 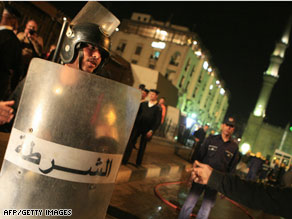 Egyptian police secure the site of a blast that killed a French tourist near a mosque and coffee shops Sunday.

Instead, security officials believe the blast -- which killed a French tourist and injured 24 other people Sunday -- likely was carried out by a few individuals with "extremist thoughts," according to Egypt's official Al-Ahram newspaper Monday.

The wounded were mainly Europeans, including 17 French nationals and a German. Three Saudis and three Egyptians -- including a soldier and a boy -- also were hurt in the explosion.

Al-Ahram reported that government security agencies were conducting a wide investigation into all extremist groups and cells in the Cairo area.

The explosion occurred during the height of the evening rush at 6:30 p.m. (11:30 a.m. ET) in an area of coffee shops located near the Al Hussein Mosque, one of Cairo's largest.

The bomb was left under a marble bench, authorities told the newspaper.

An undetonated bomb was found near the mosque, which sits close to an entrance of the Khan el-Khalili bazaar, a huge market and a tourist attraction, officials said.

Watch a report on the attack »