(CNN) -- Syria's nuclear chief told members of the United Nations' nuclear watchdog agency Tuesday that his country has built a military missile facility at a site where traces of uranium have been detected in the past, a source who attended the meeting told CNN. 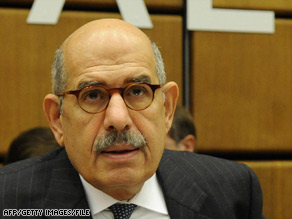 The disclosure by Ibrahim Othman to members of the U.N.'s International Atomic Energy Agency was the first time Syria has described the type of military facility it has at the Dair Alzour site, the source said.

Othman did not give details about when the facility was built or whether it was operational. He revealed the nature of the facility when asked if Syria had a nuclear facility at the site, the source said.

Syria has been repeatedly questioned over whether a nuclear facility exists at the site, which was bombed by Israeli aircraft in September 2007.

Syria says the missiles that destroyed the building at the site were the source of the uranium particles, according to an IAEA report issued last week. Israel has rejected Syria's claims.

The agency said the uranium particles "are of a type not included in Syria's declared inventory of nuclear material" and that "there is a low probability that the uranium was introduced by the use of missiles."

But, "the presence of the uranium particles," site imagery and procurement information "need to be fully understood."

Syria needs to provide more information and documentation about "the use and nature" of a building that was bombed and its procurement activities, the report said. And, Syria "needs to be transparent by providing access to other locations alleged to be related" to the site.

In the report, IAEA Director General Mohamed ElBaradei also urged Israel and other states to make any relevant information available to the agency and agree to the IAEA sharing the information with Syria.

In November, the agency asked Israel to provide information in response to Syria's claims that its munitions could have been the source of the uranium particles.

Israel said in a December 24 letter "it rejects Syrian claims on the matter" and that "Israel could not have been the source of the uranium particles found on the site of the nuclear reactor."

Syrian authorities have reacted angrily to accusations they were building a nuclear reactor. Syrian Foreign Minister Walid Moualem suggested that any trace of uranium unearthed at the military site in eastern Syria came from Israeli bombs.