Rice: U.S. will seek to end any 'illicit' nuclear ambitions by Iran 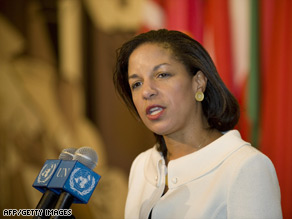 U.S. Ambassador to the United Nations Susan Rice said the U.S. will try to end Iran's "support for terrorism."

Rice spoke briefly about Iran in her speech, which was primarily focused on the Obama administration's approach to Iraq and its people. She called on the international community to provide greater support to the millions of Iraqi refugees who have been displaced because of the war.

Her comments on Iran came toward the end of her speech, when she mentioned that the United States plans to pursue a "comprehensive strategy" in the Middle East, including relations with Syria, Israel and the Palestinian people.

The United States "will seek to end Iran's ambition to acquire an illicit nuclear capability and its support for terrorism," Rice said.

President Barack Obama has said the United States is looking for opportunities for "face to face" dialogue with Iran, though he has "deep concerns" about Tehran's actions.

"We are showing the world that a new era of engagement has begun. For we know that America cannot meet the threats of this century alone, but the world cannot meet them without America," Obama said Tuesday during his first speech to a joint session of Congress.

"We cannot shun the negotiating table, nor ignore the foes or forces that could do us harm. We are instead called to move forward with the sense of confidence and candor that serious times demand."

President Mahmoud Ahmadinejad has said his country welcomes talks with the United States "in a fair atmosphere with mutual respect."

In response to Rice's speech, Iran's ambassador to the U.N., Mohammad Khazaee, sent a letter to the president of the Security Council, Yukio Takasu, defending Iran's nuclear program and challenging U.S. allegations about the program.

"It is unfortunate that, yet again, we are hearing the same tired, unwarranted and groundless allegations that used to be unjustifiably and futilely repeated by the previous U.S. administration," Khazaee wrote.

Iran has repeatedly said, and the letter echoed, that Iran's nuclear program is peaceful and the country has not and will not seek to acquire nuclear weapons.

Last week, the Washington-based Institute for Science and International Security released a report stating that Iran has reached "nuclear weapons breakout capability" -- it has enough uranium to make a nuclear bomb.

The report was based on an analysis of data from the International Atomic Energy Agency, the U.N. nuclear watchdog agency.

However, an IAEA official who asked not to be named cautioned against drawing such dramatic conclusions from the data, saying Iran's stock of low-enriched uranium would have to be turned into highly enriched uranium to be weapons-grade material. That hasn't been done, the official said.