BAGHDAD, Iraq (CNN) -- Iraq's parliament has passed a $58.8 billion budget for 2009 after cutting $3.2 billion from government spending because of weak oil prices, a Iraqi lawmaker said. 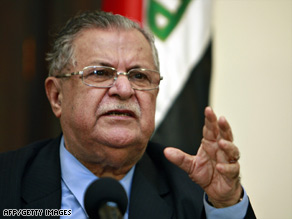 The budget, adopted Thursday, was calculated based on $50 a barrel, said Kurdish lawmaker Mahmoud Othman.

Crude oil currently is trading around $44 a barrel, and Iraq's oil-dominated economy has taken a beating due to the world financial downturn.

According to the Iraqi parliament Web site, Iraq still would expect to run up a deficit in 2009 of about $15 billion.

The original budget proposals made in July totaled $79 billion.

As a part of the trimming of government spending, Othman said that the Iraqi parliament voted to reduce the salaries of key officials by 20 percent.

The Iraqi parliament also voted to cut lawmakers' own salaries by 10 percent. The 10 percent cut also will affect other high-ranking government officials.

All About Iraq • Oil Prices