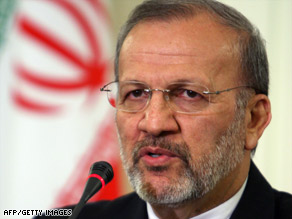 "The Islamic Republic of Iran believes that at the present juncture when the unity and solidarity of Islamic countries is necessary for supporting the Palestinian people, this act of Morocco harms unity of the Muslim world," Iran's Foreign Ministry said in a written statement, the semi-official Fars News Agency reported.

Morocco decided to cut diplomatic ties with Iran Friday, blaming Tehran's "inadmissible attitude" against the African country as a reason for the decision for the move, Moroccan Press Agency said.

The move ratchets up a feud between Sunni Morocco and Shiite Iran.

On February 25, Morocco recalled its interim charge d'affaires from Tehran for a week of consultations, the statement said.

Morocco has demanded that Iran explain "unacceptable" language in a statement it issued after Morocco expressed its solidarity with Bahrain, the statement said.

Bahrain, a tiny Persian Gulf archipelago, embodies the Sunni-Shiite divide. With a majority Shiite population and a Sunni ruler, Bahrain has become a point of contention between Morocco and Iran, said Sandra Mackey, a Middle East analyst and author of "The Iranians."

Mackey said Bahrain's government has not allowed its Shiite majority into the political and economic power structure, "so Iran has an interest in egging on this Shia foment in Bahrain -- in order to raise Iran's stature in the Persian Gulf."

Morocco has ambitions to raise its stature among Arab states, and "it would make some sense that they would jump on this," she said.

"They're far enough away where it's not going to impact on them directly," Mackey added.

Mackey said other emirates would likely be more cautious about confronting Iran, she said, "but the Moroccans can do it without posing any serious threat on their doorstep."

There is potential for conflict within Bahrain, she said.

All About Iran • Morocco • Bahrain