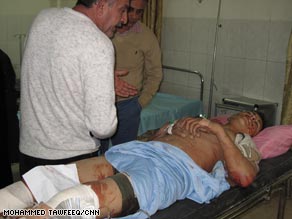 The attack -- which occurred outside the municipal building of Abu Ghraib in western Baghdad -- also wounded 46 others, the official said.

The attacker was targeting the latest effort by the government to foster national reconciliation between religious and ethnic groups.

Sunni Arab and Shiite tribal leaders were attending the meeting, backed by the Shiite-dominated Iraqi government.

Another Interior Ministry official told CNN the attack occurred when people gathered outside as the conference in the building ended.

Along with meeting attendees and journalists, Iraqi soldiers were among the casualties.

No one has claimed responsibility for the strike, but in the past, such gatherings have been targeted by al Qaeda in Iraq, the anti-American Sunni Arab militant group.

Staffan de Mistura, special representative of the U.N. secretary-general for Iraq, deplored the attack and passed along condolences to grieving families. He said the bombing targeted the tribal leaders after their meeting, and called the strike a "horrible crime that is designed to sabotage reconciliatory efforts by the Iraqi people, who, I am confident, will continue on the road of dialogue."

The blast follows another huge attack on Sunday, when a man wearing an explosives-laden vest drove a motorcycle rigged with bombs into a group of police recruits in eastern Baghdad. That attack killed 30 people and wounded 61 others.

Most of the victims of Sunday's strike were police officers and recruits who had gathered outside a police academy on Palestine Street. The same academy was targeted on December 1 in a double bombing that killed 16 and wounded 46.

The violence came after Iraqi Prime Minister Nuri al-Maliki on Saturday rallied sheikhs of the nation's tribes to participate in Iraq's government.

It was the latest official effort to further reconciliation among Sunnis, Shiites and tribes of different sects and bring some former members of Saddam Hussein's Baath party into the political fold.

After the invasion, the U.S.-led coalition decided to purge Iraqi institutions of Baathists, most of whom were Sunni Arabs.

Al-Maliki, who is Shiite, has been criticized in the past by minority groups for not fairly representing Iraqi's ethnic groups.

CNN's Yousif Bassil and Mohammed Tawfeeq contributed to this report.

All About Iraq • Nuri al-Maliki • The Baath Party