JERUSALEM (CNN) -- Pope Benedict XVI will not visit Israel's Holocaust museum when he makes his first trip to the region as pope in May, though he will visit a memorial that is part of the site, his ambassador to Israel said Tuesday. 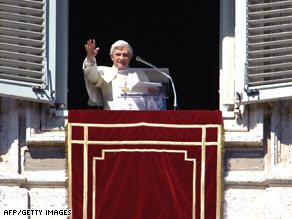 Pope Benedict XVI, shown at the Vatican during a prayer Sunday, has spoken out forcefully against the Holocaust.

He will also become the first pontiff to visit the Dome of the Rock, one of the holiest sites in Islam, said the envoy, papal nuncio Antonio Franco.

Foreign heads of state normally visit the Holocaust museum, which is part of the Yad Vashem complex in Jerusalem. But it includes controversial wording describing the role of Pope Pius XII during World War II, which is why Pope Benedict balked, an Israeli official said.

Critics have accused Pope Pius of doing too little to prevent the mass murder of European Jews by the Nazis under Adolf Hitler. A caption in the museum says he maintained a neutral position during the years of mass extermination of Europe's Jews.

Franco gave the news of Pope Benedict's visit to Yad Vashem at a news conference in Jerusalem.

Pope John Paul II also did not visit the museum section on his historic pilgrimage to Israel in 2000, Father Federico Lombardi, a papal spokesman, said as he confirmed that Pope Benedict will not do so.

An official with Israel's Foreign Ministry said the decision was made jointly because of the sensitivity of the matter. Yigal Palmor conceded that there is an argument over the wartime pope's actions during the Holocaust and noted that the museum has a sign stating that the facts are in dispute.

He said that Pope Benedict may visit other parts of the Yad Vashem complex, which is divided into several compounds, and that the pontiff will lay a wreath at the site's Hall of Remembrance, which is part of the protocol for visiting heads of state.

The announcement that Pope Benedict will visit only part of Yad Vashem also follows international outrage over his rehabilitation of a rebel bishop who denied the Nazis systematically murdered 6 million Jews in the Holocaust.

The Vatican ordered the bishop, Richard Williamson, to recant, and said the pope was not aware of Williamson's views on the Holocaust when he lifted the excommunication of the bishop.

Pope Benedict, who was born in Germany and forced to join the Hitler Youth as a teenager, has spoken out forcefully against the Holocaust on a number of occasions, including on a visit to the site of the Auschwitz concentration camp.

Pope Benedict will make his pilgrimage to the Holy Land May 8-15 with stops in Amman, Jerusalem, Bethlehem and Nazareth, according to the itinerary released by the Vatican.

He will be celebrating Mass in Jerusalem, Bethlehem and Nazareth, the city where Christians believe Jesus preached and lived. Some 50,000 pilgrims are expected to attend that event, the bishop of Nazareth said.

In Jerusalem, a city holy to all three of the major monotheistic faiths, Pope Benedict will visit the Western Wall, Judaism's holiest prayer site, and the Church of the Holy Sepulcher, which Catholics believe is the site of the crucifixion, burial and resurrection of Jesus Christ.

The pope will also meet Israel's chief rabbis and enter the Dome of the Rock with the chief Muslim cleric in the Holy Land, the grand mufti of Jerusalem.

He will also meet Jordan's King Abdullah and Israeli President Shimon Peres, as well as Mahmoud Abbas, the president of the Palestinian Authority, Franco said.

CNN's Guy Azriel in Jerusalem and Alessandro Gentile in Rome contributed to this report.

All About Adolf Hitler • Pope Benedict XVI • The Holocaust