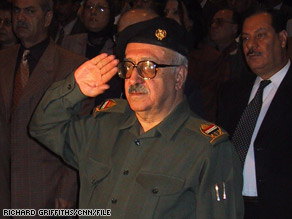 Tariq Aziz, seen in 2002, was sentenced Wednesday to 15 years in jail for crimes against humanity.

The men were sentenced for their roles in the 1992 execution of 42 merchants.

In an unrelated trial last week, Al-Majeed was sentenced to death for his role in putting down an uprising in Baghdad a decade ago, Iraqi state TV reported.

It was the third death sentence for al-Majeed, a cousin of Hussein, the former dictator of Iraq who was toppled from power by the U.S.-led coalition in 2003.

Al-Majeed and other former members of Hussein's regime remain in U.S. custody. His execution has been delayed for political rather than legal reasons.

In last week's trial, Aziz was acquitted. Aziz, one of the best-known faces of the Hussein regime, was Iraq's deputy prime minister from 1981 to 2003 and also served as minister of foreign affairs for part of that time. He was captured by U.S. forces in April 2003, shortly after the U.S. invasion of Iraq.

The Mosul car bomb, which targeted troops, killed four people and wounded 14 others, an Interior Ministry official said. The car, parked near the city's medical college, blew up near an Iraqi army patrol. Of the dead, three were soldiers. Four other soldiers were among those wounded. Mosul, which has long been a volatile city, has had a strong militant presence.

In Kirkuk, a parked car bomb exploded near a police patrol, killing two civilians and wounding seven others. The oil-rich and ethnically diverse city is known for sectarian and political tension.

People were injured in two other incidents in Iraq on Wednesday. In Baghdad, mortar fire in a residential area wounded four civilians. And a roadside bomb in the largely Kurdish town of Jalawla in Diyala province wounded four police officers.