U.S. may hand over Yemeni detainees at Gitmo to Saudis

WASHINGTON -- The United States has discussed sending some Guantanamo Bay detainees of Yemeni citizenship to Saudi Arabia for rehabilitation, according to a diplomatic source with knowledge of the discussions. 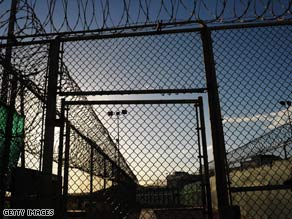 The program for Gitmo's Yemeni detainees is in harmony with U.S. plans to close the detainee camp within a year.

The source asked for anonymity because of the diplomatic sensitivity of the discussions.

The idea has been broached with both Saudi and Yemeni officials, the source said.

The State Department would not comment on the plan.

"We have been in discussion with a number of our friends, allies and partners around the world on the detainee issue," State Department spokesman Gordon Duguid said Friday.

President Obama has said he wants the detainee camp in the U.S. naval base at Guantanamo Bay, Cuba, closed within a year.

In a dramatic break with the Bush administration, the Justice Department on Friday announced it is discarding the "enemy combatant" designation, which allowed the United States to hold suspected terrorists at length without criminal charges.

The Wall Street Journal, which first reported on the rehabilitation plan, said it would involve only Yemenis who have direct family connections to Saudi Arabia.

Saudi Arabia has a program for prisoners released from Guantanamo that includes education, family reintegration and job training. It's considered a successful model, even though some of the graduates have ended up back in insurgent and terrorist organizations.

The United States currently is holding approximately 240 prisoners, around 100 of whom are of Yemeni descent. The government has cleared 15 for return to Yemen, while another 15 face trial, according to U.S. officials. Those under consideration for being sent to Saudi Arabia would be from the remaining 70 or so Yemenis whose fates have yet to be determined.

"The Saudi government is talking to the U.S. government about the return of all Saudis who are being held in Guantanamo," said embassy spokesman Nial al-Jubair.

While not confirming the plan, a spokesman for the Yemeni government said his country opposes sending Yemenis anywhere but back to Yemen.

"We want our detainees back to the homeland," said Mohammad Albasha from Yemen's embassy in Washington.

Yemen's president has been quoted as saying he would contest any such efforts by the United States.

"We refused the offer to release the Yemenis to Saudi Arabia for rehabilitation," President Ali Abdullah Saleh said in January, according to the Wall Street Journal.

While the idea of sending some of the Yemeni prisoners to Saudi Arabia for rehabilitation is appealing to the United States, the Saudi Arabian government may have an underlying motive, said Chris Boucek, a Middle East analyst at the Carnegie Endowment for International Peace and formerly an analyst with the Saudi Embassy in Washington.

"They probably want to interrogate them," Boucek said. A number of former Guantanamo detainees are now wanted by Saudi Arabia for terrorism, he said. The Saudis would probably be interested in questioning other prisoners about any possible connection to Saudi and other terror networks, he explained, before returning them to Yemen.

The Yemeni government is working on creating its own rehabilitation program, according to spokesman Albasha, and is looking at the Saudi program as a model.

"The trends are good for Saudi Arabia's program," Albasha said, noting the country is trying to deal with terrorism problems within its borders.