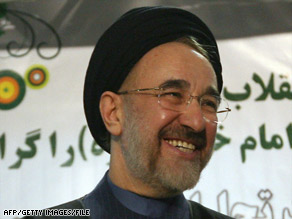 Mohammad Khatami, in a photo from February, will not run for president of Iran, the state news agency says.

But he now says he will instead support moderate candidate Mir Hossein Moussavi, Fars reported Monday.

Moussavi is a former prime minister. Before Khatami declared his candidacy last month, he had said either he or Moussavi would run as the reformist candidate to challenge Ahmadinejad, a hardliner.

Khatami said he will soon make an official statement regarding his withdrawal.

Analysts said when Khatami announced his candidacy that he had the best chance as a reformist candidate to unseat the current president.

Khatami overwhelmingly won the presidency in 1997, raising hopes that the reformist movement would bring religious and democratic freedoms to the Islamic republic. But the real power in Iran rests in the hands of the supreme leader, Ayatollah Ali Khamenei.

Khatami, who left office in 2005, was unable to make major changes because of opposition from hardline elements in Iran's clerical establishment.

In 2006, Khatami visited the United States, becoming the highest-ranking Iranian official to visit the country since the 1979 revolution that brought the Islamic government to power. He has condemned terrorism and said he regretted the taking of American hostages by Iranian students in support of the revolution.

Ahmadinejad has the support of Iran's supreme leader and the Islamic Revolution Guard Corps.