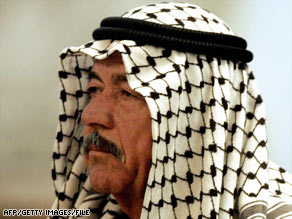 "The Cabinet calls on the presidency council to execute the will of the Iraqi people in ratifying the order to implement the decisions issued by the Iraqi High Tribunal for the criminals who were sentenced to death, based on the court's law which states that the verdicts is (are) to be executed within one month," according to a government statement.

However, the fate of the executions request was in question.

Before an execution can take place, all three members of the presidential council must sign the execution order, but so far Vice President Tariq al-Hashimi, a Sunni Arab, has refused to give his approval for at least one of the men: former Defense Minister Sultan Hashem Ahmed.

Hashem Ahmed is a prominent Sunni whose death could harm efforts to reconcile Iraq's once-dominant Sunni community with the Shiite majority that now wields political power.

The other council members are President Jalal Talibani, a Kurd, and Vice President Adil Abul Mahdi, a Shiite. Iraq law does not say what happens if all three do not sign an execution order.

Hashem Ahmed and "Chemical Ali," or Ali Hassan al-Majeed, have been on death row for more than a year after being convicted for their roles in the 1988 Anfal campaign, where al-Majeed earned his nickname by using poison gas against Kurds in northern Iraq. Thousands of people died.

Al-Majeed has received three death sentences for his crimes.

In addition to Anfal, al-Majeed has been found guilty of crimes against humanity for his key role in the slaughter of thousands of Shiite Muslims during a revolt in southern Iraq that followed the 1991 Persian Gulf War. Estimates of the Shiite death toll range from 20,000 to 100,000.

He also was convicted for aiding in the suppression of a Shiite rebellion in the heavily Shiite district of Baghdad, now called Sadr city.

Last week, the Iraqi High Tribunal sentenced him and former Prime Minister Tariq Aziz to 15 years in prison, and two half-brothers of former Iraqi dictator Saddam Hussein to death. Those sentences stem from their roles in the 1992 executions of 42 merchants.