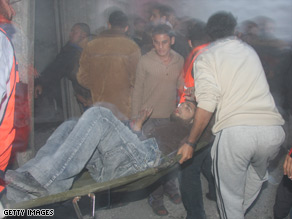 Many Palestinian civilians were killed after being caught up in the 22-day conflict in Gaza.

The claims were made by Israeli soldiers who were graduates of a premilitary course at an Israeli college. They were first reported in the Israeli newspaper Haaretz on Thursday.

At a gathering at the college after the Gaza operation, the newspaper reported, soldiers gave accounts that ran counter to persistent claims by the military that "Israeli troops observed a high level of moral behavior during the operation."

The accounts were taken down by the head of the college's premilitary program, Danny Zamir. He told Haaretz that he did not know what the soldiers were going to say and that what they heard "shocked us."

According to Haaretz, Zamir passed on the soldiers' comments to the Israel Defense Forces chief of staff, saying he "feared a serious moral failure in the IDF."

Contacted by CNN, Zamir said he would not comment to the foreign media on the matter, but he told an Israeli television network that "what was most disturbing in this matter was the perception that they give in certain units that the normative atmosphere was [that] all is permissible when you are dealing with Palestinian homes, property and, in the most extreme cases, also their lives."

He said that a full transcript of the soldiers' comments would be appearing in the Haaretz newspaper.

Portions of the transcripts appeared in the Thursday and Friday editions of Haaretz, and more is expected in coming days.

In one account, a squad leader from a brigade serving in Gaza described an incident in which he said an elderly Palestinian woman was shot and killed at the orders of a company commander:

"One of our officers, a company commander, saw someone coming on some road -- a woman, an old woman. She was walking along pretty far away, but close enough so you could take out someone you saw there. If she were suspicious, not suspicious -- I don't know. In the end, he sent people up to the roof, to take her out with their weapons. From the description of this story, I simply felt it was murder in cold blood."

According to the Haaretz transcript, the squad leader protested the rules of engagement, which he said allowed soldiers to fire on Palestinian homes without giving residents a warning. After the rules were changed, his soldiers complained that "we should kill everyone there [in the center of Gaza]. Everyone there is a terrorist."

According to Haaretz, the squad leader went on to say that, "You do not get the impression from the officers that there is any logic to it, but they won't say anything. To write 'death to the Arabs' on the walls, to take family pictures and spit on them, just because you can. I think this is the main thing: To understand how much the IDF has fallen in the realm of ethics, really. It's what I'll remember the most."

None of the Israeli soldiers quoted in the Haaretz articles admitted to taking part first-hand in the killing of Palestinian civilians, but the published accounts illustrate some of the soldiers' confusion and disagreements about the rules of engagement during an operation in which enemy combatants were often indistinguishable from civilians.

Responding to the squad commander's account of the shooting of the elderly Palestinian woman, one of his fellow soldiers replied, "[His] descriptions are accurate, But it's possible to understand where this is coming from. And that woman, you don't know whether she's ... she wasn't supposed to be there, because there were announcements and there were bombings. Logic says she shouldn't be there. The way you describe it, as murder in cold blood, that isn't right. It's known that they have lookouts and that sort of thing."

Israeli Defense Minister Ehud Barak told Army Radio on Thursday that "Israel has the most moral army in the world" and that the accounts will be checked carefully.

In addition, a coalition of Israeli human rights groups called on Israeli Attorney General Menachem Mazuz to reconsider his refusal to establish an independent investigative body to examine the military's actions during the Gaza campaign, known as "Operation Cast Lead."

The groups -- The Association for Civil Rights in Israel, Bimkom, B'tselem, Gisha, Hamoked, The Public Committee Against Torture, Yesh Din, Physicians for Human Rights, Rabbis for Human Rights, Adalah, and Itach -- Women Lawyers for Social Justice -- said accounts by Palestinians raise the possibility that acts by the military were worse than previously suspected.