CAIRO, Egypt (CNN) -- Suzanne Hagelof and Iris Botros dreamed of adopting babies. Separately, they visited orphanages in Egypt. Hagelof adopted a child, and Botros was in the process of adopting twins, when they ran foul of authorities. Now they are in jail, accused of being part of a conspiracy to traffic children. 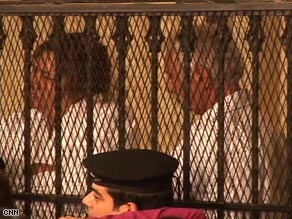 Iris Botros and her husband, Luis Andros, are accused of trying to smuggle twins out of Egypt.

Last week, the two women were led into a Cairo courtroom in handcuffs, along with six other people. They stood in a big black cage in the courtroom, looking apprehensive amid the hubbub.

To their defenders, all they were trying to do was provide orphans with a better chance in life. To the prosecution, they were involved in forging documents to try to adopt children illegally and smuggle them out of the country.

Along with the two American women, the accused include their husbands, two doctors, a nun who ran an orphanage, and an Egyptian banker.

Watch the women get bundled into court »

A year ago, Hagelof, a U.S. citizen who lives in Egypt with her husband, adopted a child from an orphanage run by the Coptic Christian Church, a religious minority in Egypt. She says no money changed hands.

Both women wanted to take the children to the United States -- in Hagelof's case for a visit, but in Botros' case to begin a new life in Wake Forest, North Carolina. And that's where the trouble began.

To get a visa for the children, both women went to the U.S. Embassy in Cairo. According to their attorneys, the documents they presented included birth certificates and certificates signed by doctors stating they were the natural mothers.

According to defense attorneys, the two women knew they were using forged documents.

Embassy officials became suspicious of the documents -- partly because the women seemed too old to be the mothers. Both Hagelof and Botros are in their mid- to late forties.

The embassy contacted Egyptian authorities, and both Hagelof and Botros -- along with their husbands -- were arrested soon afterward, as was a nun from a Coptic orphanage and a banker who allegedly helped Botros make contact with the nun. Also arrested were two doctors who had written the certificates for the three infants, all of whom are now at an orphanage not affiliated with the church.

Neither the U.S. Embassy nor the U.S. State Department will comment on the case, citing the ongoing trial.

Botros' husband, Andros, blames the embassy for their plight. Asked through the bars of the courtroom cage what had happened, he replied, "Well, our American Embassy, instead of helping the people, they put them in jail."

His wife interjected, insisting they would not get a fair trial. A few feet away, Suzanne Hagelof called out, "We want to tell our story," while her husband, Medhat, looked on, quiet and dejected. As reporters tried to talk to the defendants, a guard intervened, shouting "Sit down, sit down."

Adoption has long been illegal under Egyptian law as well as being forbidden under sharia, Muslim religious law. Fostering is legal but uncommon.

"I came to realize what an insidious crime this was and how it was just really built on profit. On not only low morals, on no morals at all," she said.

And that's how the prosecution seems to be framing this case, using a law passed last year that provides for tough penalties for human trafficking. Khalil Adil El Hamani, the attorney representing Hagelof, says Egyptian authorities want to prove that all the defendants are from one gang and are trafficking children, so as to make the case seem to be a giant conspiracy.

Both couples insist they had no idea what they were doing was illegal and have no link with human trafficking. The attorney representing Botros and her husband says their only crime was to dream of being parents.

"They are now are in jail because of this dream," he told CNN after the first hearing in the case a week ago. "They never thought that they will be in jail. They thought that they are going to adopt only. They didn't think they are making something against the law in Egypt."

All eight defendants remain in jail -- the men at the Tora prison in Cairo, well known for its overcrowding. The next stage of the trial takes place May 16, and proceedings could last six to eight months. If they are convicted, the accused could each face up to 10 years in prison.

All About Egypt • Adoption