Israeli general: Soldiers did not act in 'cold blood'

JERUSALEM (CNN) -- Israel's top general said Monday he did not believe the country's soldiers "hurt civilians in cold blood" after newspaper reports quoted soldiers who said the army had treated Gaza as a free-fire zone during its offensive this winter. 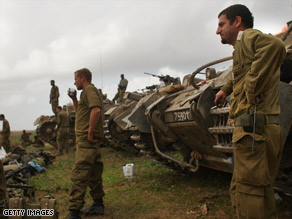 Israeli soldiers, just back from Gaza, January 17, 2009, along the Gaza-Israeli border in Israel.

"I tell you that this is a moral and ideological army," Lt. Gen. Gabi Ashkenazi, the chief of staff, said in a speech.

Israeli soldiers said last week that Palestinian civilians were killed and Palestinian property was intentionally destroyed during Israel's military campaign in Gaza, according to the newspaper Haaretz.

The Israel Defense Forces has said it is investigating the claims.

"I don't believe that soldiers serving in the IDF hurt civilians in cold blood, but we shall wait for the results of the investigation," Ashkenazi said.

He blamed Hamas, the militant Palestinian group which runs Gaza, for choosing "to fight in heavily populated areas."

"It (was) a complex atmosphere that includes civilians, and we took every measure possible to reduce harm of the innocent," he said, according to an IDF statement.

The accounts in Haaretz are from Israeli soldiers who graduated from a pre-military course at an Israeli college.

TheIsraeli soldiers complain in the reports that the rules of engagement often defied logic and left the impression with Israeli troops that "inside Gaza you are allowed to do anything you want."

"At first the specified action was to go into a house," one squad leader is quoted as saying. "We were supposed to go in with an armored personnel carrier called an Achzarit [which translates to "Cruel"] to burst through the lower door, to start shooting inside and then ...

"From above they said it was permissible, because anyone who remained in the sector and inside Gaza City was in effect condemned, a terrorist, because they hadn't fled. I didn't really understand: On the one hand they don't really have anywhere to flee to, but on the other hand they're telling us they hadn't fled so it's their fault ... This also scared me a bit."

Israeli Defense Minister Ehud Barak told Army Radio Thursday that "Israel has the most moral army in the world" and that the accounts will be checked carefully.

But graduates of the Yitzhak Rabin pre-military preparatory program at Oranim Academic College in Kiryat Tivon, the newspaper reported, gave accounts that ran counter to military claims that "Israeli troops observed a high level of moral behavior during the operation."

The accounts were written down by the head of the college's pre-military program, Danny Zamir. He told Haaretz that he did not know what the soldiers were going to say and that what they heard "shocked us."

According to Haaretz, Zamir passed on the soldiers' comments to Ashkenazi, saying he "feared a serious moral failure in the IDF."

Contacted by CNN, Zamir said he would not comment to the foreign media on the matter. He told an Israeli television network that "what was most disturbing in this matter was the perception that they gave in certain units that the normative atmosphere was 'all is permissible' when you are dealing with Palestinian homes, property, and in the most extreme cases also their lives."

In one account, a squad leader from a brigade serving in Gaza described an incident in which an elderly Palestinian woman was shot and killed at the orders of a company commander.

None of the Israeli soldiers quoted in the Haaretz articles admitted to taking part first-hand in the killing of Palestinian civilians, and it is unclear whether all of them witnessed the events they described.

Separately, a coalition of nine Israeli human rights groups called on Israeli Attorney General Menachem Mazuz to reconsider his refusal to establish an independent investigative body to examine the military's actions during the Gaza campaign.

The groups -- The Association for Civil Rights in Israel, Bimkom, B'tselem, Gisha, Hamoked, The Public Committee Against Torture, Yesh Din, Physicians for Human Rights, Rabbis for Human Rights, Adalah and Itach - Women Lawyers for Social Justice -- said accounts by Palestinians raise the possibility that acts by the military were worse than previously suspected.