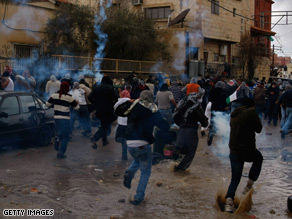 The march by Israeli extremists turned into violence on the streets of Umm al-Fahm.

About 100 far-rightists marched in the predominantly Muslim town of Umm al-Fahm, and the angry Arab demonstrations that erupted after the march took place left more than nearly 30 people injured and at least 10 people detained, police said.

The Jewish group, led by Hebron activist Baruch Marzel, petitioned the Supreme Court for permission to stage the march, with the rightists arguing that they were exercising their right to march under Israeli law as Arabs and Muslims have in Israeli towns like Tel Aviv.

But marchers disseminated a particularly hot-button message in Umm al-Fahm that has been setting people off: They demanded that Israeli Arabs should be loyal to the Jewish state, a stance considered insulting by many Israeli Arabs.

While the march leaders are not affiliated with right-wing party Yisrael Beytenu, their words about Arab loyalty reflect the concerns among Israeli Arabs about that political movement, which made a strong showing in recent elections.

It has called on Arabs -- who it sees as disloyal to Israel -- to have their citizenship revoked. And, Avigdor Lieberman, that party's leader, also said that such Arab towns like Umm al-Fahm could become part of a Palestinian state in any peace arrangement.

Leaders in Umm al-Fahm -- the scene of past bloody clashes with police and an Islamist hub -- warned that the march would provoke violence, and 2,500 police mobilized in the town.