Netanyahu reaches out to Palestinians

JERUSALEM (CNN) -- Incoming Israeli Prime Minister Benjamin Netanyahu said Wednesday his government will be a "partner for peace" with the Palestinians. 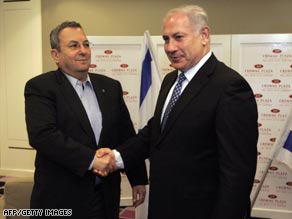 Speaking to an economic forum, Netanyahu said, "Palestinians should understand that they have in our government a partner for peace, for security and for rapid economic development of (the) Palestinian economy; I believe that this could be done."

This comes a day after the central committee of the left of center Labor Party voted to join a coalition government headed by Netanyahu, the leader of the right of center Likud party.

Under the agreement, Labor leader Ehud Barak would remain Israeli defense minister, and Netanyahu would achieve his goal of broadening a coalition made up mainly of right-wing parties.

Despite these words, his past statements have sparked persistent skepticism about the political will Netanyahu would have to make the moves necessary for an Israeli-Palestinian peace agreement.

Just before the Israeli elections, Netanyahu had been visiting the West Bank settlement of Beit Arieh when he was asked why he was visiting a community considered illegal by much of the world community.

He said leaving the spot would hurt Israel's security and accused his rival Kadima party of contemplating a pullout from the area, a policy of "retreat and weakness."

"Behind us is the Israeli national airport, Ben Gurion International Airport, behind us is Tel Aviv and the coastal plain in which most of Israel's population lives.

"The Kadima platform would have us vacate this place in the belief that it would purchase peace. It won't. It will simply implant another Hamas base, terror base here, backed by Iran with Iranian missiles that would be fired on Tel Aviv and Ben Gurion national airport. And this is something we cannot accept.