JERUSALEM (CNN) -- Incoming Israeli Prime Minister Benjamin Netanyahu warned Tuesday that "extremist Islam is trying to bring us down through terrorism from north and south" as his Cabinet prepared to take office. 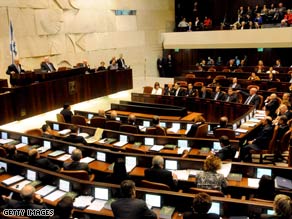 Netanyahu and his Cabinet were sworn in later in the day, after the Israeli parliament confirmed his new government in a 69-45 vote.

The prime minister offered an olive branch of sorts to Palestinians but did not hold out the promise of their own state.

"In order for there to be peace, our Palestinian allies and partners also have to fight terrorism," he said. "They must bring up their children in the spirit of tolerance and peace. In the last two decades, six heads of government in Israel have failed to achieve a peace settlement, but they were not at fault. I say to the leaders of the Palestinian Authority: If you really want peace, then peace can be achieved.

A senior Palestinian official immediately responded that Israel must end its "occupation" of Palestinian land if it wants peace.

"I hope that Mr. Netanyahu will openly accept the two-state solution, negotiation on all core issues without exception, and stop the settlement activity, including natural growth, so we can have a partner in peace-making," said Saeb Erekat, chief negotiator for the Palestinian Authority.

Netanyahu described Israel's neighbors as "moderate," but, like Israel, threatened by radical Islam.

Netanyahu, leader of the center-right Likud Party, will lead a mostly right-leaning coalition that includes the hardline Yisrael Beytenu Party and the center-left Labor Party.

His Cabinet is the largest in Israeli history, with 30 ministers and deputy ministers.

Opposition leader Tzipi Livni ridiculed the size of the government.

"The Israeli public is a skinny person who today has had the swollen, overweight government placed on its head. It has ministers for nothing with all sorts of ridiculous titles," said Livni, the Kadima Party leader and former foreign minister who refused to join the Netanyahu coalition.