(CNN) -- The head of the U.N. Children's Fund has expressed concern over a Saudi judge's refusal for a second time to annul a marriage between an 8-year-old girl and a 47-year-old man. 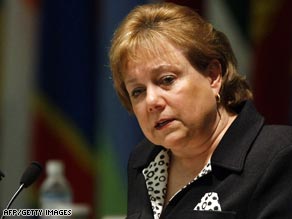 UNICEF's Ann Veneman said consent cannot be free if either party is too young to make an informed decision.

"Irrespective of circumstances or the legal framework, the marriage of a child is a violation of that child's rights," said Ann Veneman, executive director of UNICEF.

"The right to free and full consent to marriage is recognized in the Universal Declaration of Human Rights. Consent cannot be free and full when either party to a marriage is too young to make an informed decision."

The most recent ruling, in which the judge upheld his original verdict, was handed down Saturday in the Saudi city of Onaiza, where late last year the same judge rejected a petition from the girl's mother, seeking a divorce for her daughter. Have your say by clicking here

A relative said the judge, Sheikh Habib al-Habib, "stuck by his earlier verdict and insisted that the girl could petition the court for a divorce once she reached puberty." The family member, who requested anonymity, added that the mother will continue to pursue a divorce for her daughter.

The case, which has drawn criticism from local and international rights groups, came to light in December when al-Habib declined to annul the marriage on a legal technicality. The judge ruled that the girl's mother -- who is separated from her father -- was not the girl's legal guardian and therefore could not represent her in court, Abdullah al-Jutaili, the mother's attorney, told CNN at the time.

The girl's father, according to the lawyer, arranged the marriage in order to settle his debts with the man, who is a close friend of his. At the time of the initial verdict, the judge required the girl's husband to sign a pledge that he would not have sex with her until she reaches puberty, al-Jutaili told CNN. The judge ruled that when the girl reaches puberty, she will have the right to request a divorce by filing a petition with the court, the lawyer said.

Last month, an appeals court in the Saudi capital of Riyadh declined to certify the original ruling, in essence rejecting al-Habib's verdict, and sent the case back to him for reconsideration.

The issue of child marriage has been a hot-button topic in the deeply conservative kingdom recently. While rights groups have petitioned the government for laws to protect children from such marriages, the kingdom's top cleric has said that it's OK for girls as young as 10 to wed.

"It is incorrect to say that it's not permitted to marry off girls who are 15 and younger," Sheikh Abdul Aziz Al-Sheikh, the kingdom's grand mufti, said in remarks last January, according to the regional Al-Hayat newspaper. "A girl aged 10 or 12 can be married. Those who think she's too young are wrong, and they are being unfair to her."

Al-Sheikh reportedly made the remarks when he was asked during a lecture about parents forcing their underage daughters to marry.

"We hear a lot in the media about the marriage of underage girls," he said, according to the newspaper. "We should know that sharia law has not brought injustice to women."

CNN was unable to reach government officials for comment.

Christoph Wilcke, a Saudi Arabia researcher for Human Rights Watch, told CNN in December that his organization has heard of many other cases of child marriages.

Wilcke said that although Saudi ministries might make decisions designed to protect children, "It is still the religious establishment that holds sway in the courts, and in many realms beyond the court."

In December, Zuhair al-Harithi, a spokesman for the Saudi government-run Human Rights Commission, said his organization is fighting against child marriages.

Wajeha al-Huwaider, co-founder of the Society of Defending Women's Rights in Saudi Arabia, told CNN that achieving human rights in the kingdom means standing against those who want to "keep us backward and in the dark ages."