BEIRUT, Lebanon (CNN) -- U.S. Secretary of State Hillary Clinton arrived in Lebanon on Sunday to pledge U.S. support for the country and its push for free elections. 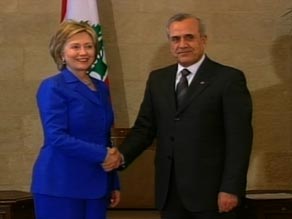 "The people of Lebanon must be able to choose their own representatives in open and fair elections, without the specter of violence or intimidation, and free of outside interference," Clinton said during an unannounced visit to Beirut.

It was Clinton's first time visiting the country since taking office.

Lebanon is preparing for legislative elections in June that analysts say could bring the militant group, Hezbollah, to power.

The Obama administration backs the unity government of Sleiman, while Syria is allied with Hezbollah.

"Both of us are committed to supporting President (Michel) Sleiman's efforts to build a peaceful, prosperous, sovereign and democratic Lebanon."

Clinton is expected to meet with Sleiman and lay a wreath at the tomb of former Lebanon Prime Minister Rafik Hariri, who was killed in a bomb attack in 2005.

Many Lebanese, as well as the United States, accused Syria of orchestrating the assassination of Hariri, an outspoken opponent of Syria. Damascus denied responsibility.

But massive popular protests after Hariri's death led to the pullout of thousands of troops that Syria maintained in Lebanon from the 1970s.

A senior state department official said Clinton's visit is intended to reassure Lebanon that the United States will not forgo its support of the country as it opens dialogues with Syria and Iran.

"Beyond the election, we will continue to support the voices of moderation in Lebanon, and the responsible institutions of the Lebanese state they are working hard to build," Clinton said.

All About Hillary Clinton • Lebanon