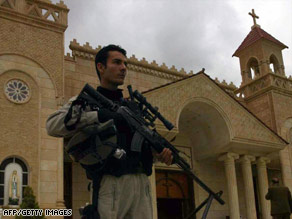 Due to persecution, Christians in Iraq have had to rely on Iraqi security forces, as shown here on Easter Sunday.

The first occurred in a neighborhood in southern Kirkuk when a Christian woman and her daughter-in-law were murdered in their home late night Sunday. Police told CNN the attackers slit the women's throats.

In a neighborhood close by, gunmen attacked a Christian family in their home, shooting a father and his three sons, police said. One of the sons died instantly and the other son and the father were wounded.

Many of Iraq's estimated 1 million Christians have fled the country after targeted attacks by extremists.

In October, more than a thousand Iraqi families fled the northern city of Mosul after they were reportedly frightened by a series of killings and threats by Muslim extremists, who apparently ordered them to convert to Islam or face possible death.

At least 14 Christians were killed in Mosul in the first two weeks of October.

All About Mosul • Kirkuk • Islam