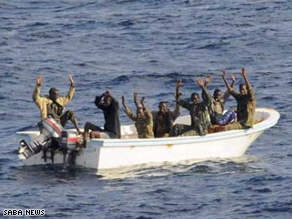 11 pirates were arrested by Yemeni security forces in an operation to free the oil tanker.

Three marines were wounded in the operation conducted by Yemeni forces, according to the SABA news agency.

The tanker was seized Sunday on its way to Aden, SABA said. Aden is a port city in southwestern Yemen.

Meanwhile, two pirates were killed and one injured when Yemeni troops freed three other ships Sunday, SABA reported. Four pirates were also arrested in the operation, it added.

Piracy has become a major problem in recent years in the waters off Somalia, which has not had an effective government since 1991.

Despite the introduction of international naval patrols in the region, pirates have continued to attack commercial vessels and collect large ransoms, running into millions of dollars, from shipping companies.

Attacks on ships in the Gulf of Aden and off Somalia's coast accounted for 61 of the 102 attacks during the first quarter of this year. That compares with six incidents for the same period in 2008, said the International Maritime Bureau, which issues regular reports on piracy worldwide.

The European Union and several nations, including the United States, have naval forces in the region to protect vessels against pirate attacks. The head of EU naval forces in the waters off Somalia said recently that restoring long-term stability to Somalia will be what ultimately stops the attacks.

Rear Adm. Philip Jones said: "It'll be a long period of time before that's successful, and we must be ready to secure the seas until that's in place."