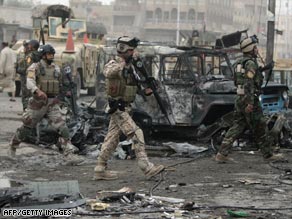 Iraqi soldiers survey one of the Baghdad marketplaces where car bombs detonated Wednesday.

In a separate incident, five people were killed and three wounded by a roadside bomb south of Baghdad, a ministry official said.

Most of the deaths came when three car bombs parked at separate but nearby marketplaces exploded in quick succession in the eastern Baghdad Shiite neighborhood of Sadr City, killing at least 45 people and injuring at least 68, the ministry official said.

Three other car bombings followed. Two of those, outside a Shiite mosque in the Hurriya district of northern Baghdad, killed three people and wounded eight. The bombs exploded in close succession shortly before 9 p.m. (2 p.m. ET). A third a few hours earlier injured at least five civilians in a predominantly Shiite area of southwestern Baghdad, according to the ministry.

Wednesday's series of bombings echoed an incident earlier this month, when seven car bombs detonated within about four hours. The U.S. military blamed al Qaeda in Iraq for what it called coordinated attacks.

Sadr City is a heavily populated Shiite area, with an estimated 2.5 million people packed into a 25-square-kilometer area. The district was a stronghold of Shiite cleric Muqtada al-Sadr's Mehdi Army, but most of the fighters went underground after fierce fighting in April 2008.

In a seventh bombing Wednesday night, at least five people died and three were wounded south of Baghdad, a ministry official said. A roadside bomb struck a minibus in Hor Rajab, a predominantly Sunni area on the southern outskirts of Baghdad. The casualties were all civilians, the official said.

There has been an uptick in bombings and attacks in recent weeks, mainly targeting Shiites and Shiite areas. Last Thursday and Friday, five suicide bombings, as well as other attacks in Baghdad and Diyala province, left almost 160 people dead and 275 wounded.

Earlier Wednesday, U.S. and Iraqi troops were ambushed in northern Iraq, according to Maj. Derrick Cheng, spokesman for the U.S. military's Multi-National Division-North. The troops were on a joint mission in Riyadh, southwest of Kirkuk, where coalition forces are working with local police to provide micro-grants to small businesses, Cheng said. Several individuals attacked the troops using at least one grenade and small arms fire, he said.

Cheng said two of the attackers reportedly were killed and another two were wounded. A woman reportedly was injured by shrapnel from the grenade, but was treated and released, he said. A soldier was reported wounded but was in good condition, Cheng said.

So far this month, 15 U.S. soldiers have died in Iraq, compared to nine in March -- most of those in non-combat-related incidents. March's death toll was the lowest monthly toll for the U.S. military since the war began 2003.

The Riyadh incident comes at a time of heightened tension between the U.S. military and the Iraqi government, after two Iraqis were killed during a military raid south of Baghdad on Sunday. Iraqi state TV reported that Iraqi Prime Minister Nuri al-Maliki accused U.S. troops of violating the security agreement between the two countries with the raid in Wasit province.