BEIRUT, Lebanon (CNN) -- Four generals held without charges since 2005 in connection with the assassination of former Lebanese Prime Minister Rafik Hariri were freed Wednesday on orders from the U.N. tribunal investigating the killing. 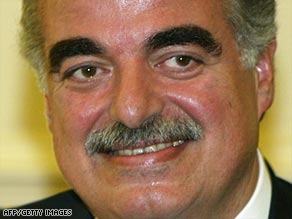 The four -- Jamil Sayyed, Ali Hajj, Raymond Azar and Mustafa Hamdan -- had been arrested after a coalition led by Hariri's son Saad swept to power in the wake of the assassination.

They were met by well-wishers upon their release, with opposition lawmakers greeting Azar, Hajj and Sayyed.

"This never happened since the Ottoman times, even during the Syrian time, that people were just locked in jail for no reason and no charge," Sayyed said after being met by top lawmakers from the opposition party Hezbollah.

He called for supporters to remember them in parliamentary elections scheduled for June, and "let justice take over."

Sayyed was the director of Lebanon's internal security services at the time of the car bombing, which killed 22 others along with Hariri. Hajj was the country's domestic security chief; Azar was the head of military intelligence and Hamdan was in charge of President Emile Lahoud's security force.

The U.N. tribunal convened to investigate Hariri's February 2005 death ordered the men released earlier Wednesday, declaring the evidence against them was "not sufficiently credible to request the maintenance in detention of those persons."

Hariri was credited with rebuilding Beirut after the country's 15-year civil war ended in 1990. Many Lebanese blamed Syria, which had dominated Lebanon politically and militarily since the civil war, for the killing.

The assassination sparked widespread protests that led to the election of an anti-Syrian bloc in parliament and the withdrawal of Syrian troops from Lebanon.

Damascus denies any role in Hariri's killing, but the U.N. investigation has found indications of Syrian involvement.

In a speech following Wednesday's announcement, Saad Hariri said he accepted the order freeing the suspects "because that shows the seriousness of the tribunal."

"We said before that we don't want revenge from anyone, even those that we suspect were behind the crime," Hariri said.

He added, "We don't want any scapegoat. We want justice."

The U.N. tribunal opened in March, and the prosecution could take as long as 10 years, sources close to the probe said.

Investigators have had to navigate Lebanon's tightly interwound politics, where power is divided among the country's Christian, Sunni Muslim and Shiite Muslim blocs and between pro- and anti-Syrian factions.

Hezbollah, the pro-Syrian Shiite movement that maintains its own militia, took up the generals' cause and hailed their release.

"Their detention was a disgrace to the Lebanese legal system and everyone who was involved in their detention," Hezbollah lawmaker Ibrahim Amin said.