LONDON, England (CNN) -- Britain officially handed over authority of Basra to Iraq on Thursday, marking the end of combat operations in the country after six years. 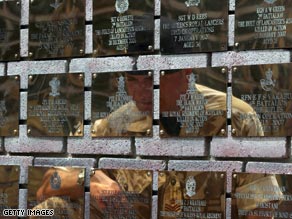 The 4,000 British forces in the southern city now will begin rapidly withdrawing over the next month, leaving just 400 who will lead specialist training with the Iraqi army and navy, a spokesman for the British Ministry of Defence told CNN.

It means British combat troops will be out of Iraq before the announced deadline of July 31.

"We've always been planning on this date," said the spokesman, who declined to be named in line with policy. "It's just that we couldn't make it public for security reasons."

British forces held a memorial service Thursday to remember the 179 British personnel killed while serving in Iraq -- 136 of them killed during hostile action.

The ceremony took place at the Basra Memorial Wall, which stands outside the UK Headquarters building on the Basra base.

The wall commemorates the 178 troops and one civil servant who have died, along with 54 personnel from other nations, who died while serving with British forces.

"Their sacrifice must not be forgotten," said British Defence Secretary John Hutton. "But Iraq's progress over the six years, no matter how uneven or uncertain it may have appeared at times, shows that their sacrifice has not been in vain."

At the peak of the campaign -- during combat operations in March and April 2003 -- the United Kingdom had 46,000 personnel involved in operations in Iraq, the ministry states, including those stationed in support services outside the country.

While Britain began closing down the combat operations in Basra, Iraqi Prime Minister Nuri al-Maliki was in Britain for a meeting with his counterpart, Gordon Brown. The two discussed opening Iraq up to more investment opportunities.

"Now the military mission has finished, our two countries will pursue new partnerships in the areas of politics, economics, business and science," al-Maliki said at a news conference. "This will promote relationships with the countries who have stood by and backed Iraq to achieve success."

Al-Maliki also plans to attend a conference in London called "Invest Iraq," which has been organized by the Department for International Development to help stimulate economic development in Iraq, the Ministry of Defense said. Some 250 of the world's largest companies will be there, Brown said.

Improving trade and investment is a key to consolidating the security gains that have been made in Iraq, the Ministry of Defense said.

"This is a clear message to companies worldwide that Iraq is open for business," Brown said at the news conference.

The two touted the recent overall downturn in violence as one reason companies should look to invest in Iraq, but the past month has seen a spike in attacks.

Six car bombs went off within a four-hour period in Baghdad on Wednesday, killing 48 people and wounding 81, according to Iraq's Interior Ministry.

The bombings echoed an incident earlier in April when seven car bombs detonated within about four hours. The U.S. military blamed al Qaeda in Iraq for what it called coordinated attacks.

All About Basra • Iraq War