TEHRAN, Iran (CNN) -- A U.S. journalist imprisoned for spying in Iran and in the midst of a hunger strike was admitted to the prison hospital to receive nourishment, her father said Tuesday. 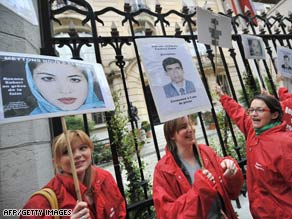 Reporters Without Borders members demonstrate on Sunday at the Iranian Embassy in Paris, France.

Roxana Saberi was taken to the hospital at Tehran's Evin prison on Friday and was fed intravenously before being returned to her cell, according to Reza Saberi, who said his daughter looked "weak and frail" when he saw her on Monday.

The 32-year-old Iranian-American journalist was tried and convicted on espionage charges in a one-day trial last month that was closed to the public. She was sentenced to serve eight years in prison.

She launched her hunger strike to protest her confinement at Evin, which houses many Iranian dissidents and political prisoners. Iran's attorney general, Hojjatoleslam Dorri Najafabadi, said last month that Saberi's case "will go through its legal process like other cases," according to Iran's unofficial Shahab news Web site.

Saberi's case has prompted sharp denunciations from President Obama and other U.S. and international officials.

Saberi has been living in Iran since 2003, according to the Committee to Protect Journalists, a journalists' advocacy group.

Authorities also said Saberi had confessed. Her father said he thinks she was coerced into making damaging statements.