TEHRAN, Iran (CNN) -- A U.S. journalist imprisoned in Iran has stopped her hunger strike after more than two weeks, her father said Wednesday. 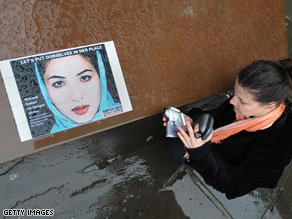 Roxana Saberi stopped her hunger strike Monday night after both parents visited her in prison.

Roxana Saberi, 32, had been drinking water but eating no food in protest at her detention at Tehran's Evin prison, according to her father, Reza Saberi. Officials had brought her to the hospital Friday and fed her intravenously before returning her to her cell, her father said.

Roxana Saberi stopped her hunger strike Monday night after both parents visited her in prison and pleaded with her to end it, Reza Saberi told CNN.

In an e-mail sent Wednesday morning to supporters, Saberi said, "We were very glad to hear this news. We hope she will gain some strength to enable her to stand the appeal trial. She thanks all those who have supported her with their hunger strike all over the world."

The Iranian-American journalist was tried and convicted on espionage charges in a one-day trial last month that was closed to the public. She was sentenced to eight years in prison.

Reza Saberi said the family is looking forward to the appeals process, expected to begin next week. But he told CNN, "We do not know what to expect. We just have to wait and see."

Roxana Saberi launched her hunger strike to protest her confinement at Evin, which houses many Iranian dissidents and political prisoners. Iran's attorney general, Hojjatoleslam Dorri Najafabadi, said last month that Saberi's case "will go through its legal process like other cases," according to Iran's unofficial Shahab news Web site.

Saberi's case has prompted sharp denunciations from U.S. President Barack Obama, as well as other U.S. and international officials.

Saberi has been living in Iran since 2003, according to the Committee to Protect Journalists (CPJ), a journalists' advocacy group.

She has freelanced for National Public Radio and other news organizations and was writing a book about Iranian culture.

Authorities also said Saberi had confessed. Her father has said he thinks she was coerced into making damaging statements.

All About Iran • Evin Prison