BAGHDAD, Iraq (CNN) -- A southern Baghdad marketplace became a scene of carnage for the second time in a month when a car bomb exploded Wednesday, killing at least 15 people and wounding 40, an Interior Ministry official said. 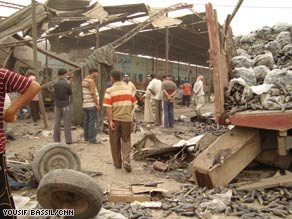 Iraqis look at damage from a bombing at a produce market in Baghdad on Wednesday.

They were the latest in a string of attacks that are stoking fears of renewed warfare as U.S. troops prepare to withdraw from Iraqi cities.

The deadliest of the three attacks came during the busy morning hours at the Alwat al-Rasheed produce market in the capital's Dora district. The market was the scene of one of seven attacks on April 6 that struck mainly Shiite Muslim districts of Baghdad.

One angry survivor of the blast blamed the continued American presence in Iraq for the violence.

"The Americans are responsible for what is happening," he told CNN. "It is because of the occupation that every day we have killings and wounded people."

Another car bomb was later found in the market and safely detonated by a munitions team, the Interior Ministry said. That bomb was set to explode as emergency response teams arrived at the scene, officials said.

Security at the market seemed to be lax. Vehicles in the area were not checked by security forces, who said they did not have equipment to detect explosives.

In the central district of Karrada, where a bomb in a minibus killed two people Wednesday morning, news vendor Jumaa al-Qureishi said the latest bombings have left Iraqis "afraid of a return to violence and terror."

"The Iraqi army and police are still not ready to take over security responsibilities," al-Qureishi said. "You can see that on the streets. People have no confidence in them. Car bombs are getting through checkpoints."

The third bomb exploded as a traffic police patrol was passing by. The blast wounded four officers and three civilians, an Interior Ministry official told CNN.

The latest attacks follow an April uptick in violence that made it the deadliest month this year for Iraqi civilians and American troops. The U.S. military blames al Qaeda in Iraq for the attacks, which have been concentrated in Baghdad and the northern city of Mosul, the jihadists' last urban stronghold.

Recent attacks by the Sunni Arab jihadists have targeted Shiites in an attempt to rekindle the sectarian warfare that ravaged Iraq in 2006 and 2007, Perkins said. But the attacks have so far failed to generate retaliation by the country's Shiite majority.

U.S. troops are slated to pull out of Iraqi cities at the end of June as part of an agreement that will see all American troops leave the country by the end of 2011.

Maj. Gen. Qassim Atta, the Iraqi military's spokesman in Baghdad, said the government remains determined to take over security for the cities when the Americans withdraw. But he said he would not paint a "rosy picture" of the situation Iraqi security forces face.

"The battle with what is left of the terrorist groups and former regime members is ongoing," he said.

CNN's Cal Perry and Yousif Bassil contributed to this report.