BAGHDAD, Iraq (CNN) -- The troubled Blackwater era ends in Iraq on Thursday as another firm takes over the once-dominant company's security services contract in Baghdad. 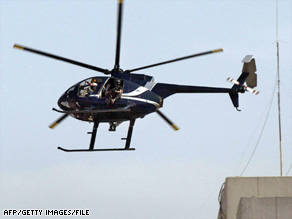 A helicopter for the private security firm then known as Blackwater flies over Baghdad in October 2003.

Triple Canopy, a Herndon, Virginia-based company, picks up the expiring contract of the security firm formerly known as Blackwater Worldwide, which changed its name to XE a few months ago. The U.S. State Department decided not to renew XE's contract in January.

"When the U.S. government initially asked for our help to assist with an immediate need to protect Americans in Iraq, we answered that call and performed well," XE spokeswoman Anne Tyrell said in a statement Wednesday. "But we always knew that, at some point, that work would come to a close."

The end of the contract followed the Iraqi government's refusal to renew the firm's operating license because of a September 2007 shooting in which Baghdad says security guards -- then employed by Blackwater -- killed 17 Iraqi civilians.

As part of a contract to protect American diplomats and other employees around the world, the State Department hired Blackwater for a multiyear assignment in Iraq, renewable annually.

XE, one of three security firms working for the United States in Iraq, had one of the biggest contracts there, providing security for the sprawling U.S. Embassy in Baghdad.

"We are honored to have provided this service for five years and are proud of our success. No one under our protection has been killed or even seriously injured," Tyrell said.

Losing the contract is considered a huge blow to XE. While the company is privately held, the Iraq contract has been estimated to make up a third to a half of its business. XE has about two dozen aircraft in Iraq as well as 1,000 personnel.

XE's statement acknowledged that the company's Baghdad "task order" ends Thursday but was mum on any other roles it still might have in Iraq.

"Any specific questions on the contract and how it will now be fulfilled should be directed to the State Department," Tyrell said.

Despite the loss of the embassy security detail, XE continues to hold other contracts with the State Department to protect American diplomats elsewhere in the world. The company's founder, Erik Prince, resigned as head of the business in March.

Blackwater said its employees were returning fire after armed insurgents attacked them, but an Iraqi investigation concluded that the guards randomly fired at civilians without provocation. The Iraqi government said 17 civilians were killed, although the indictment alleges 14 died.

The company does not face any charges. But the Baghdad incident exacerbated the feelings of many Iraqis that private American security contractors have operated since 2003 with little regard for Iraqi law or life.

The indictment of the five men represents the first prosecution of non-Defense Department contractors under the Military Extraterritorial Jurisdiction Act.

The act was amended in 2004 to allow the Justice Department to prosecute such personnel providing services "in support of the mission of the Department of Defense overseas."