AMMAN, Jordan (CNN) -- Pope Benedict XVI arrived Friday in Amman, Jordan, for a weeklong visit to the Middle East that he hopes will help "foster good relations between Christians and Muslims." 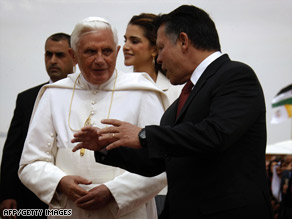 It will be the first papal visit to some of Christianity's most holy places since Pope John Paul II made the pilgrimage in 2000. The pope will also meet with Muslim scholars and visit Jordan's King Hussein Mosque.

"My visit to Jordan gives me a welcome opportunity to speak of my deep respect for the Muslim community and to be treated to the leadership shown by his majesty, the king ... in promoting a better understanding of the virtues proclaimed by Islam," the pontiff said in a brief address shortly after arriving in Amman.

Two years ago, Pope Benedict XVI gave a speech that caused friction between the Muslim and Christian communities when he quoted a Byzantine emperor who said the teachings of Islam's Prophet Mohammed were "evil and inhuman."

The remarks sparked an outcry from Muslims around the world and the pope later apologized, saying the emperor's words did not express his personal convictions.

Watch a walk-through of a mosque the pope will visit »

"Your holiness, we welcome your commitment to dispel the misconceptions and divisions that have harmed relations between Christians and Muslims," Jordan's King Abdullah said in an address that preceded the pope's.

Pope Benedict will spend four days in Jordan as part of his tour of the Middle East, which will also take him to Israel and the Palestinian territories.

While in Jordan, he will take part in prayer services and meet with Islamic scholars, diplomats and academics, according to Jordan's Petra News Agency.

He will also visit Mount Nebo in Madaba, Jordan, where Moses -- an important prophet in the Muslim, Christian and Jewish religions -- is believed to have died and been buried.

On Monday, the pope will fly from Amman to Tel Aviv to begin his visit to Israel and the Palestinian territories. He is scheduled to pay a courtesy visit to the grand mufti of Jerusalem and the two chief rabbis of Jerusalem.

The pontiff will return to Rome next Friday.

Watch the difference between two popes: the populist and the professor »

"The pope will be facing not only the issues of Catholic-Jewish relations and Catholic-Muslim relations -- two faiths with which he's had his problems over the four years that he's been on the job -- but he'll also be wading right into the thick of the Israeli-Palestinian conflict," he said.

The Jewish community and others recently expressed outrage over the pope's rehabilitation of a rebel bishop who denied the Nazis systematically murdered 6 million Jews in the Holocaust.

Bishop Richard Williamson was one of four bishops excommunicated 20 years ago by the Church for belonging to a group that rebelled against the Vatican's modernizing reforms in the 1960s.

All four bishops were reinstated in January, but shortly before that, Williamson said in an interview with Swedish television that he did not believe that Nazi leader Adolf Hitler deliberately set out to murder Jews or that there were gas chambers at the Auschwitz death camp.

The Vatican ordered Williamson to recant, and said the pope was not aware of Williamson's views on the Holocaust when he lifted the excommunication.

The pope later admitted to making mistakes in the decision, saying the church should have been aware of his views. Williamson apologized for his remarks, but did not recant them.

Pope Benedict will not visit the Yad Vashem Holocaust museum during his visit to Jerusalem though he will visit its adjacent memorial section. The museum includes controversial wording that reflects a long-running dispute over the role of Pope Pius XII during World War II.

Critics have accused Pope Pius of doing too little to prevent the mass murder of European Jews by the Nazis under Hitler. A caption in the museum says he maintained a neutral position during the years of mass extermination.

Pope Benedict, who was born in Germany and forced to join the Hitler Youth as a teenager, has spoken out forcefully against the Holocaust on several occasions, including on a visit to the site of the Auschwitz concentration camp.

Israeli President Shimon Peres said in March he was "delighted" the pope was coming, when the dates for the tour were announced.

"The pope will be a most honored guest, welcomed and respected by people from all walks of life. His visit will be a moving and important event bringing the spirit of peace and hope," Peres said in a statement.

The leader of the world's estimated 1.1 billion Roman Catholics is also expected to visit Bethlehem, where Christian tradition holds that Jesus was born. The site is in the West Bank, which is part of the Palestinian territories.

"Both Palestinians and Israelis have high hopes for what the pope might say. They also have fears for what they might hear from the Holy Father," Allen said. "It is going to be a weeklong high-wire act for Pope Benedict XVI in the Holy Land."