By Hussein Rashid
Special to CNN

Editor's note: Hussein Rashid is special visiting instructor in the Department of Religion at Hofstra University and an associate editor at Religion Dispatches. 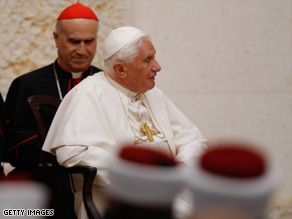 Hussein Rashid says Pope Benedict XVI, here at a Jordan mosque, can use his moral authority for peace.

(CNN) -- There is an assumption that the visit to the Middle East by Pope Benedict XVI will be a profound event. However, no one seems to be asking why there is such an expectation.

Unlike Pope John Paul II, who recognized the state of Israel and visited Muslim holy sites, both historic events, the current pope is better known for interfaith missteps.

Coverage of Benedict's visit to the region seems implicitly to hope for further conflict; everybody is ready for the fight and is disappointed when the hockey game breaks out. What is not acknowledged, and what makes this trip noteworthy, is not the man but the institution of the papacy.

At its peak, the Christian population of the region was about 30 percent, and it is currently less than 5 percent, and the majority of these Christians have never been Roman Catholic. The pope is not speaking to his flock, so while his message may be steeped in Catholic thought it must appeal more broadly and resonate with communities who are wary of him, but who still respect his office.

His mere presence functions to remind people of three things: Jesus delivers a message both Christians and Muslims recognize, different faiths are not inherently at war, and the region cannot be seen in what author Reza Aslan calls a "cosmic war."

The area the pope is visiting is important to the life of Jesus. Of course, Jesus is an important figure for Muslims as well, who hold him as a prophet. In addition, Mary is revered by Muslims and frequently mentioned in the Quran. The pope's presence reminds all in the region of the special place Jesus holds for Christians and Muslims, a commonality that is taken for granted, or perhaps even forgotten.

He should speak to this point and build upon his reservations of interfaith dialogue. I have argued elsewhere that his critique of interfaith is not a pullback from peace building, but a challenge to build something more substantial than peace in name only. His choice of Jordan is symbolic of a real, lasting, multifaith environment, and I do not believe it was an accidental choice.

There is a tendency to assume that the conflict in the region of the last two generations is emblematic of the entire history of religious interaction. The Jordanian example, and the pope's ability to speak to Christians in other countries in the area, shows how intertwined Christian and Muslim life are and have been for centuries. They worship at the same shrines, and with Jews, revere the sites common to all three Abrahamic traditions. Unfortunately, as the Palestinian-Israeli conflict continues to escalate, religious rhetoric continues to erode these common bonds.

The pope cannot and should not be a political broker in the region. He is a religious leader, and that conflict is not religious. He should lend his moral voice to talking down the religious language that is increasing around the conflict. Until recently, many of the most eloquent spokespeople among the Palestinians were Christians, including Hanan Ashrawi and the late Edward Said.

It is a conflict of nations, Palestine and Israel, not Jews and Muslims. By constructing it as a religious battle we must write away over a millennia of Mizrahi and Sephardi Jewish history. These Jewish communities were found in the Iberian Peninsula, the Middle East, Central Asia and the Caucasus, and represented the vast majority of the worldwide Jewish community. They lived side by side with Muslims, holding significant positions of authority and contributing to the growth of Jewish thought.

A religious conflict also means ignoring Palestinian Christians and their contributions, hopes and desires. The pope can make sure that the language of religion is not politicized and that this conflict does not become "cosmic," where humans have no choice but to fight to the death. He can remind us that we have the ability to create peace and justice, and that religion is not simply a tool for hate and violence.

Benedict committed several faux pas in dealings with both Muslim and Jews, but by focusing on these errors we do not give him a chance to be the pope.

The opinions expressed in this commentary are solely those of Hussein Rashid.