Place of 'miracle' for Afghanistan's amputees

(CNN) -- Award-winning photojournalist James Nachtwey was one of five photographers commissioned by the International Committee of the Red Cross (ICRC) to capture images of life in some of the world's most troubled countries. 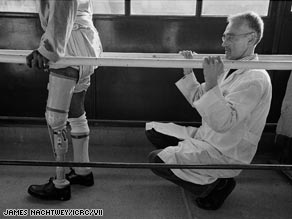 Alberto Cairo, director of the Kabul Orthopedic Center, helps an amputee adjust to a prosthetic.

The project took him to the ICRC Orthopedic Center in Kabul, Afghanistan, a place he describes as "a kind of miracle," and a refuge from the harsh reality of life in the country's war-torn capital.

The center operates under the direction of Alberto Cairo, a lawyer-turned-physiotherapist from Piedmont, Italy who has been working in Afghanistan since 1989.

Watch video of the Orthopedic Center »

He is shown here in the photo, checking the alignment of an amputee's prosthesis to make sure that he stands straight.

Nachtwey's photos of the Kabul Orthopedic Center are being displayed in the ICRC exhibition, "Our World -- At War," which opened in New York, Geneva and more than 40 countries in early May.

It also features photos Nachtwey took in Central Mindanao in the Philippines and pictures by other leading photojournalists including Ron Haviv, Franco Pagetti, Christopher Morris and Antonin Kratochvil.

Watch what is being done for landmine victims »

See photos Ron Haviv took in the Democratic Republic of the Congo and Haiti.

The exhibition is part of the Our world. Your move. campaign, which is being conducted with the the International Federation of Red Cross and Red Crescent Societies as part of the 150th anniversary of the Battle of Solferino which is considered to be where the idea of the Red Cross was started.

Have you been affected by conflict? Send your photos and stories to iReport.