Woman elected in Kuwait says gender in politics is 'history'

(CNN) -- As one of the first four female lawmakers ever elected to Kuwait's parliament, Aseel al-Awadhi knows she has a tough road ahead in the conservative Gulf state's male-dominated legislature. 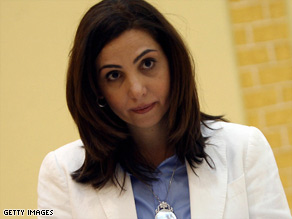 Rola Dashti is one of four women who won parliamentary seats in the recent elections in Kuwait.

"Even before the results, people were piling up to congratulate me either from my own district or from other districts," al-Awadhi, a university instructor, told CNN Sunday.

Men have filled the seats of Kuwait's parliament for nearly five decades, and it was only four years ago that the country granted women the right to vote and run for office.

"The Kuwaiti women have been able to notch up this great victory at a crucial time and set a precedent in the history of Arabian Gulf parliaments," Mohammad Al-Feili, a constitutional law professor at Kuwait University, told the official Kuwait News Agency.

Two-hundred-and-ten candidates ran for 50 seats in the general election; 16 were women.

"Yes, they do, absolutely," she said. "Yes, I mean, this is my second time running for election. I ran last time ... and yes, people were talking about change. But this time, I realized that people are determined -- that they want to achieve change, they want to see change happen."

The elections were called after the emir, Sheikh Sabah al-Ahmad al-Sabah, dissolved parliament, which is made up mostly of opposition politicians. He said he was dissolving parliament to put an end to a crisis that had paralyzed decision-making.

The parliament had been locked in a feud with the government, which it accuses of corruption and abuse of power. It has been pressuring the government for the right to question ministers on deals.

The parliament is made up of elected lawmakers, but ministers are appointed.

The al-Sabah family has run Kuwait since it came into existence more than two centuries ago.

All About Kuwait • Sabah al-Ahmad al-Sabah