BAGHDAD, Iraq (CNN) -- Abu Ahmed says he was there: An Iraqi held prisoner at Abu Ghraib by the American military when inmates were abused. 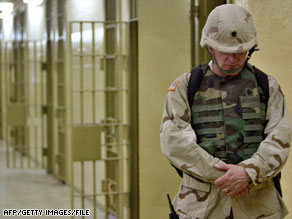 Abu Ahmed says he and other inmates were held naked and forced to stand in their cells.

He says he was kept naked and saw other naked inmates stacked onto a pile while photos were taken, photos that would become public and bring shame to the United States.

The pain of the past few years is clearly etched on the man's face and equally obvious as he talks. It began October 1, 2003, he says, when U.S. troops came to his home and detained him during a sweep of his neighborhood.

The next day, he was processed and put into Abu Ghraib prison in Baghdad.

"They made us take off all our clothes, even our underwear," recalled the man who is afraid to reveal his identity, instead offering up the alias of Abu Ahmed.

See the photos of the abuse »

That treatment went on and on, Abu Ahmed said. "For 32 days I was without clothes, even if we wanted to pray, we had to pray naked."

Abu Ahmed says he saw more abuse from his cell, including one of the incidents captured in one of the infamous photos.

"One day, they brought three or four detainees, maybe more. They were about 40 years old or older. They took off their clothes, forced them to climb on top of each other and start taking pictures ... I saw it with my own eyes," he said.

The U.S. military fully admits that the treatment of Iraqis inside Abu Ghraib at that time was unacceptable by its own standards, and that detention centers in Iraq today are run on very different lines.

President George W. Bush declared that the "abhorrent" acts were "a stain on our country's honor and our country's reputation." They made Americans "sick to our stomachs," he said in May 2004, soon after the photos became public.

But Abu Ahmed says it is still hard for him to look at an American.

"Thanks to God, I have the ability to handle worse sights. I can't blame you for everything that these people did," he said.

"But, at the end, the American people are responsible for everything that happened," Abu Ahmed said, referring to the war that he believes turned his life upside down.

Abu Ahmed spent a total of 20 months in U.S. custody, between Abu Ghraib and Camp Bucca, outside Basra in southern Iraq.

He then returned home, where he spent less than five months with his family before being arrested again, this time by the Iraqi army in yet another sweep through his neighborhood.

He says his treatment inside Iraqi facilities was even worse than what he faced at the hands of the U.S. military. His Iraqi captors, Abu Ahmed says, beat him with cables and pipes; he even had a cement block hung from his genitals.

Documents issued to him by the U.S. military corroborate many aspects of his story, showing that he was in Abu Ghraib and Camp Bucca during the time he says he was. He asked us not to contact the Iraqi army to confirm details of his detention, fearing that they might arrest him again.

He does not want any restitution and now works with the Iraqi government, trying to rebuild his life.

Abu Ahmed has never been charged with a single crime.

All About Abu Ghraib • Iraq • Torture