CAIRO, Egypt (CNN) -- An Egyptian business tycoon and a former police officer have been found guilty in last July's slaying of a rising Lebanese pop singer. 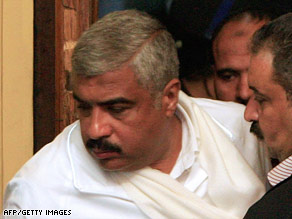 Mustafa's lawyer told reporters outside the courtroom that he will appeal the conviction, saying there was "a one million percent guarantee" the sentence would be overturned.