Inside Iraq: Living with the enemy

BAGHDAD, Iraq (CNN) -- I first met Abu Wissam at the foot of his son's shallow grave. Never will he be able to erase the last image he has of his son's body. 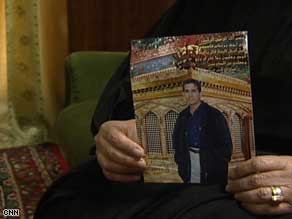 "He was cut to pieces," he said. "His hands and feet were chopped off. And he was decapitated."

For a long time, Iraqis would say that it was "outsiders" that were carrying out such atrocities. The truth that is so hard to accept for many is that that often was not the case.

Iraqis turned on each other, neighbors slaughtered neighbors, friends betrayed one another. It was the sheer degradation of society on a shocking and utterly petrifying scale.

Abu Wissam's son Raed was a 25-year-old business school student. His fiancee says that one day he got a phone call from a college friend asking to meet him. Little did she know that it was a plot to lure him out of the house and that it would be their last goodbye.

They were childhood sweethearts. She says they knew that they would get married from the time they were six. "All I do now is cry," she sobs.

Raed's mother can barely form a coherent sentence. Her voice shakes with every word, uncontrollable tears pour down her face. Her hands tremble holding Raed's worn-out photograph. From time to time she caresses the image, the face that she will never touch again.

"Nights aren't nights anymore, days aren't days. They cut his hands off, they cut his head off."

Watch World's Untold Stories - Inside Iraq: Living with the Enemy »

As the last words leave her mouth she can no longer speak, only cry.

The militia behind the kidnapping was the self proclaimed Mehdi Army, a Shia militia loyal to radical cleric Muqtada al-Sadr. And the militiamen were once friends and neighbors.

For years my colleagues and I have reported on the atrocities committed by Shia militias, Sunni insurgents, and al Qaeda gunmen.

We recited the daily tally of unidentified, mutilated bodies found in the streets of Baghdad. We spoke of beheadings, kidnappings and torture. But little did we really know about any of it.

Now that there is a semblance of so-called stability, we can start to put a face and name to the victims and begin to try and understand and impart the horrors of what millions of Iraqis lived through and tens of thousands died from. It is only now that we can begin to comprehend the magnitude of what Iraqis went through.

Raed's body was found in the courtyard of a mosque not far from his home. Abu Wissam says that the militia accused Raed of being a spy for the Americans. They demanded $10,000 for Raed's corpse. Abu Wissam paid. The killers did not hand it over.

Nearly a year later, once the militia was forced underground by the "Sons of Iraq" -- a rival U.S. backed militia -- he found Raed's body. Twenty-seven other bodies were also dug up, including that of a teenage girl. We're told that the militiamen shaved her head before they slaughtered her. Her family is too petrified to speak to us.

Others clamor around our camera crew. Clutching photographs of their loved ones still missing. Desperate to grasp on to any thread that might lead them to those who vanished. They tell us about how they used to hear the victims' screams, how that sound still haunts them.

They tell us the killers are still out there.

The pain is palpable. So much sorrow and anguish, choking emotions, sheer helplessness, in just one location, one mosque in Baghdad with dried blood still streaking the walls.

How does a society just rip apart like that? How do families that have grown up together for generations suddenly turn on one another?

There are plenty of experts and analysts offering their opinions.

As for Abu Wissam, he doesn't know why the people he cheerily said good morning to for decades all of a sudden slaughtered his boy.

"They were our neighbors, they lived in the homes around us," Abu Wissam says.

He tells us how on hot summer days when ice was in short supply and power cuts were rampant, he would take a cold pitcher of water over to their house. He tells us these were the people who sold vegetables at the market.

Can a father ever forgive his son's killers? Stop seeking justice?

The families of the victims often gather at Abu Wissam's house. They don't talk of reconciliation or forgiveness. They talk of wanting justice -- and that means the killers' detention and execution.

"The government has done nothing for us," one of the mothers gathered there says, her voice filled with anger and frustration.

"We will take our own revenge. I say that as a woman, I don't have a man who can stand up for me, I will take revenge with my own hands. I will booby-trap myself and head towards them, towards their families."

He has worked with the Iraqi security forces identifying the members of the militia, operating with them on raids. And he has come face to face with some of his son's killers. And he asked them why.

"They said, 'We had orders to kill. For each person we killed they gave us $10,000,' " Abu Wissam says. "Their families are still defending them, saying our sons didn't do anything."

How can they live with themselves and the cold-blooded reality of what they have done? How can a society that has been so violently ripped apart come back together?

The political and military leadership speak in positive overtones. We're watching U.S. troops fulfill a timeline to "end the war," so desperate is America for some sort of ending.

But it is not over. For Iraqis it's far from over. In many ways it is just beginning.