JERUSALEM (CNN) -- Israel started its biggest emergency drill in the nation's history Sunday to prepare civilians, soldiers and rescue crews for the possibility of war, the defense force said in a statement. 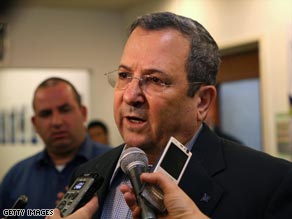 Israeli Defense Minister Ehud Barak has expressed skepticism that Iran can be persuaded to abandon its nuclear ambitions.

It will be conducted in public facilities, including schools, military bases and government offices. Students, soldiers and other civilians will practice how to gather at protected places during an emergency.

Officials said the drill will include simulated rockets, air raids and other attacks on infrastructure and essential facilities, and use of weapons on civilians.

Everyone is expected to go to a protected place at the sound of sirens, the defense force said, adding that more instructions will be broadcast on a public channel.

"It is of great importance that every civilian, institute and workplace will seriously practice in order to improve our preparedness and national resilience," Maj. Gen. Yair Golan of the Home Front Command said in a news statement.

The move comes amid tension between Israel and Tehran.

Barak's views are keeping with the majority of his countrymen.

An Israeli poll released this month found that 74 percent believe that the U.S. policy of engagement with Iran will fail and 81 percent think Iran will develop a nuclear weapon capability.

Israel has conducted emergency drills the past two years, but officials said this is the biggest so far.

All About Iran • Israel