Editor's note: Fawaz A. Gerges holds the Christian A. Johnson Chair in Middle Eastern Studies and International Affairs at Sarah Lawrence College. His most recent book is "Journey of the Jihadist: Inside Muslim Militancy." 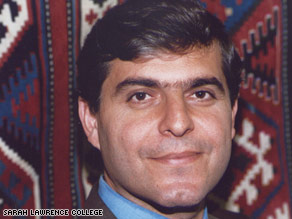 Fawaz A. Gerges says President Obama must appeal to those facing economic hardship and political oppression.

(CNN) -- In his speech Thursday to the Muslim world from Egypt, President Obama must seize the moment to stress that the U.S. is not at war with Islam, to appeal to millions of young men and women burdened by economic hardship and political oppression, and to help broker an Arab-Israeli peace settlement.

To be effective, the president must simultaneously address not only thorny regional conflicts but also the fears, hopes and aspirations of young Muslims for a better life.

The challenge facing Obama is to strike a balance between foreign policy concerns and bread-and-butter issues and to convince the youth, by far the largest constituency, that America feels their pain, supports their participation and inclusion in political and social life, and opposes the violation of their human rights, period.

It is a tall order that requires active presidential engagement and considerable investment of political capital.

Obama could not have chosen a more appropriate venue than Egypt, a pivotal country, to deliver his message to the Muslim world. As the Arab world's most populous nation (about 80 million people) and its cultural capital, Egypt is a microcosm and driver of Arab politics. iReport.com: Share your thoughts on American-Muslim relations

In the past century, Egypt has defined the dominant political systems and ideologies in the Arab arena, including constitutionalism, militarism, secular nationalism and Islamism.

Today Egypt's political authoritarianism is the norm, not the exception, in other Arab countries. Autocratic Arab rulers, including Egyptian President Hosni Mubarak, now in his 28th year in power, have repressed legitimate political dissent and stifled personal initiative and innovation. Their prolonged repressive and failed policies have literally broken Arab societies and caused chronic poverty, pervasive corruption and the rise of extremism.

According to the World Bank's World Development Indicators, 43.9 percent of Egyptians live on less than $2 a day, a figure consistent with poverty conditions in other Arab countries, excluding the oil-rich producing Gulf sheikdoms.

Young people under 30, who represent more than 60 percent of the Muslim population, suffer disproportionately and cannot find good jobs or afford marriage, with one in four young Egyptians sitting idle, the United Nations says.

Exacerbating the dire economic situation, Mubarak and his Arab counterparts have allowed the rich to grow richer at the expense of the poor and to flaunt their wealth before the eyes of a population struggling to survive.

According to the United Nations, the proportion of Egyptians living in absolute poverty increased in the first part of the decade, while the economy has been growing at up to 7 percent a year, filling the coffers of the small, wealthy elite. Growth has not trickled down to the poor majority pressed by high inflation, particularly a 50 percent increase in food prices in recent years.

Religious-based opposition groups are the main beneficiary of failing pro-Western Muslim rulers such as Mubarak. In the early 1970s, economically Egypt was on the same level as South Korea. Today, it is far behind -- almost half of the Egyptian population is either poor or on the brink of poverty. Repression and corruption are pervasive, and legitimate dissent is forbidden.

It's not a surprise that Egypt is home to the Muslim Brotherhood, the most powerfully organized Islamist network in Muslim countries, as well as militants who founded the jihadist movement.

The brain of al Qaeda is Egyptian, not Pakistani, Saudi or Afghan -- a fact that has received scant attention in the U.S. -- with Ayman al-Zawahiri, Osama bin Laden's right-hand man, and his lieutenants masterminding the terrorist group's operations worldwide.

Like other Muslims, 78 percent of Egyptians say they have an unfavorable view of the United States, an alarming finding given that Egypt is the second largest recipient of U.S. foreign aid ($2 billion annually) after Israel.

As Obama completes the draft of his historic address, he must tackle three key factors that fuel anti-American sentiment in Egypt and the Muslim world: a widespread belief that the U.S. blindly supports Israel at the expense of powerless Palestinians, that America wages a war against Islam and that it sustains autocratic Muslim rulers who oppress their citizens and deny them basic rights.

Equally important, the president cannot afford to ignore the plight of millions of voiceless Muslims, particularly the youth, who feel marginalized and ghettoized with no stake in the existing order.

He already has raised expectations of a change in U.S. policies to a feverish pitch. In the most recent survey in six Arab countries, 73 percent felt positive or neutral toward Obama, while as many had an unfavorable view of U.S. foreign policy.

Many ordinary, poor Egyptians say that the story of the African-American president holds lessons for them: He succeeded in overcoming social and ethnic hurdles and reached his dream. With the right message, Obama will have a positive impact on the Middle East and relations between America and the region.

Human rights and pro-democracy activists on both sides of the country's nationalist-Islamist political divide have called on Obama to send a powerful message to Muslim opinion that he will genuinely promote the rule of law and human rights as a central plank of the U.S. agenda in the greater Middle East.

While the government-controlled media have welcomed Obama's speech in Egypt as an acknowledgment and recognition of Mubarak's leadership, the nonreligious opposition fears that Obama's embrace of Mubarak will bolster his regime and legitimize its further repression of dissidents.

Obama's decision to address the Muslim world from Cairo has raised the stakes. He must walk a fine line between offending his Egyptian host, Mubarak, and undermining the stability of his regime and downplaying human rights violations and subversion of the rule of law by Mubarak and his Arab counterparts.

Despite what some of his "realist" advisers tell him, Obama must not shy away from stating the obvious: Political repression not only violates human dignity but is also a source of perpetual instability, economic and intellectual stagnation, and extremism as the case of the greater Middle East shows.

Obama should say there are no inherent contradictions between an open society and national security, as some in the region wrongly believe. And he must say that the U.S. is ready to assist in gradually opening up closed Muslim political systems and making them more inclusive and transparent.

To allay the fears of the ruling elite, Obama must stress that his administration will not experiment in shock tactics or social engineering; checks and balances will ensure a smooth and orderly and responsible political transition.

For his message to strike a deep chord, Obama must pledge to invest in institution building, particularly the creation of a vibrant and effective economic base. Only then can he reach the hearts and minds of Muslims who otherwise will dismiss him as just another contributor to their collective grievance.